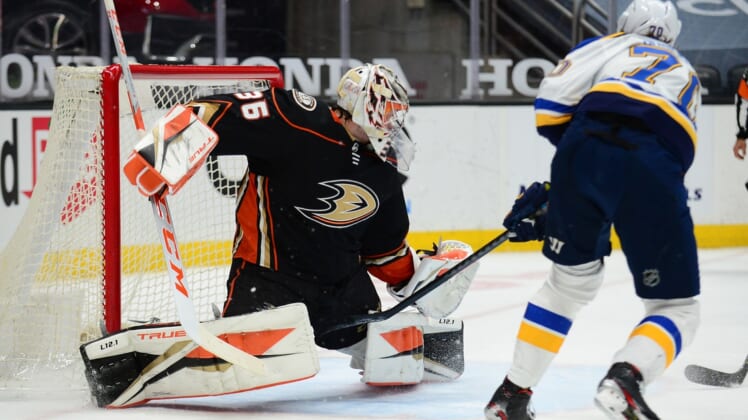 Oskar Sundqvist, Brayden Schenn and Zach Sanford each scored a power-play goal and the St. Louis Blues completed a sweep of a two-game set with the host Anaheim Ducks, earning a 3-2 victory Wednesday.

Blues goaltender Jordan Binnington made 27 saves in his first action since he was pulled in the middle of a 7-6 road victory over the San Jose Sharks on Saturday.

After scoring 12 combined goals over their past two games, five of them in a victory Monday at Anaheim, the Blues cooled off a bit while remaining red hot on the road. St. Louis improved to 9-2-0 away from home this season, including 4-0-0 at Anaheim.

Max Comtois and Rickard Rakell scored for the Ducks, who lost their eighth consecutive game (0-6-2), five of which were at home. Anaheim goaltender John Gibson had 18 saves.

The Blues got going in a measured first period when Sundqvist scored his fourth of the season 14:45 into the game. With his back to the goal, Sundqvist corralled a hard pass from David Perron, spun to his left and scored past a flat-footed Gibson.

Sundqvist also was involved in the second Blues goal midway through the second period, sending a pass back to Torey Krug near the blue line. Krug found a wide-open Schenn, who scored his team-leading 11th of the season on a blast from the top of the right circle.

Sanford scored his seventh of the season when he pounced on a loose puck in the crease with just under seven minutes remaining for a 3-1 lead. Sanford now has six points (four goals, two assists) over his past three games.

Rakell scored his third of the season for the Ducks with 8.7 seconds remaining as rookie Trevor Zegras had an assist to earn his first career point in his fifth game.