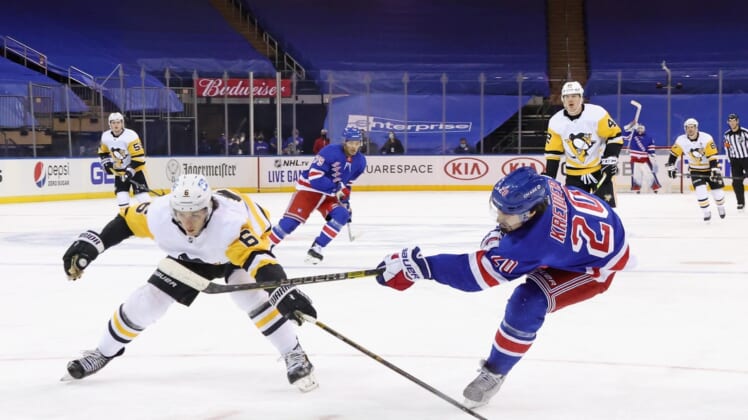 The Penguins, who snapped a two-game losing streak, possessed the puck for most of the extra session and managed to get a full line shift leading to the goal by Crosby, whose shot sailed between the legs of Alexandar Georgiev.

Jason Zucker, Brandon Tanev, Kasperi Kapanen and Jake Guentzel also scored for the Penguins, who had a trio of one-goal leads in regulation. Goalie Casey DeSmith made 30 saves.

The Penguins took the lead at 7:39 of the first when Pierre-Olivier Joseph recorded the first of his three assists by firing the puck into the crease, where Zucker tapped the puck past Georgiev.

The Rangers tied the score in chaotic fashion a little more than six minutes later, when Lemieux descended upon DeSmith and put home the rebound of Phillip Di Giuseppe’s shot as Yannick Weber crashed into DeSmith with 6:08 left.

The Penguins controlled a faceoff deep in the Rangers’ zone before breaking the tie in the final minute, when Tanev redirected Joseph’s shot with 39.4 seconds remaining.

A nine-minute second period sequence featuring four goals began with the Rangers knotting the score again, this time on a 2-on-0 short-handed breakaway in which K’Andre Miller deked DeSmith and passed to Rooney, who fired a shot into the open net at the 7:20 mark.

The Penguins retook the lead on their own breakaway 2:22 later, when Kapanen took a clearing pass from Evgeni Malkin and shuffled the puck before beating Georgiev with the forehand.

The lead lasted just 43 seconds before Kreider put back the rebound of a shot by Jacob Trouba. The Rangers then took their first lead with a power play goal by Panarin with 3:59 left in the period.

Guentzel tied the score with 10:42 left in regulation with a third-effort goal in which he put back his rebound of a shot by Cody Ceci.