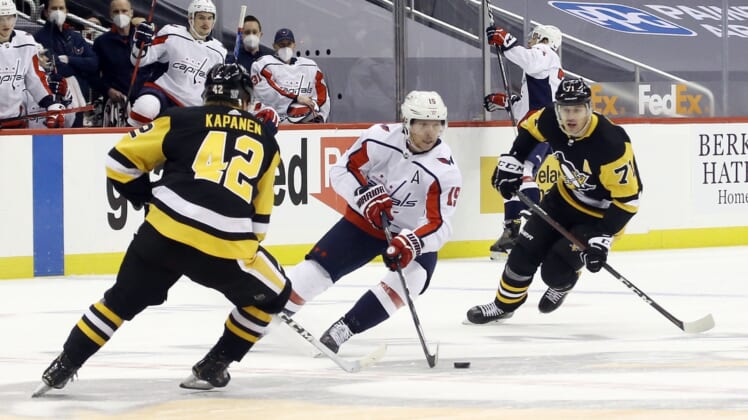 Bryan Rust had two goals and an assist Sunday as the Pittsburgh Penguins topped the visiting Washington Capitals 6-3.

Washington, which had not played in a week, has lost four straight.

Jake Guentzel had a goal and two assists and Sidney Crosby added a goal and an assist, and Brandon Tanev and Zach Aston-Reese also scored for Pittsburgh. Defensemen Cody Ceci, Kris Letang and Mike Matheson each notched two assists apiece, and goaltender Tristan Jarry made 28 saves.

The Penguins have come from behind in each of their seven wins, and Sunday’s victory was just their second in regulation this season.

Kuznetsov, who missed the previous eight games on the COVID-19 protocol list, gave Washington a 1-0 lead with a power-play goal at 5:18 of the first. His shot went in off the leg of Penguins defenseman John Marino.

Pittsburgh tied it at 10:29 of the first. Matheson, heading down the right circle, took a pass from Crosby and sent the puck to the far side of the crease for a Rust tip-in.

Tanev gave the Penguins a 2-1 lead 32 seconds later. He deposited a rebound of a shot by Ceci.

The Capitals tied it at 3:26 of the second when Vrana scored on a backhander.

Pittsburgh broke an 0-for-21 power play skid at 6:44 of the second for a 3-2 lead. Rust took a pass from Letang near the bottom of the left circle and threaded a shot past Vanecek’s short side.

Guentzel gave Pittsburgh its first two-goal lead of the year at 10:44 of the second when he slammed home his own rebound to make it 4-2. Rust picked up his 100th career assist on the play.

Backstrom closed it to 4-3 at 17:49 of the second. The Penguins’ Evgeni Malkin was marking Backstrom down the slot, and it appeared Malkin was going to whisk away a feed from Alex Ovechkin along the right-wing boards, but Backstrom pilfered the puck and poked it past Jarry.

Aston-Reese added an empty-netter with 1:11 left, and Crosby did the same with 48.2 seconds left.