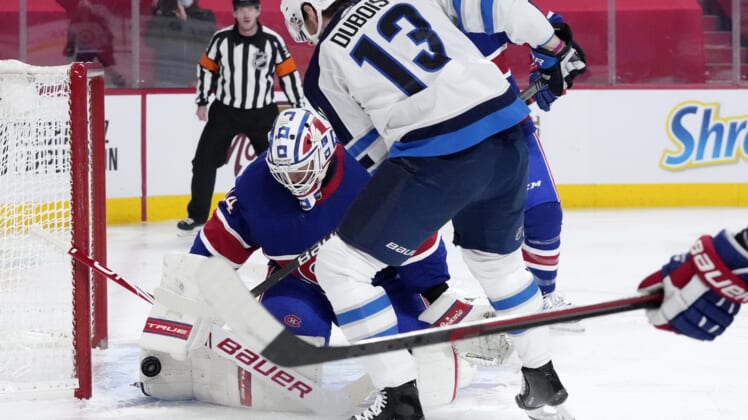 Pierre-Luc Dubois scored with 31 seconds remaining in overtime as the Winnipeg Jets defeated the host Montreal Canadiens 4-3 Thursday night in the opener of a two-game series.

Paul Stastny scored twice and Mathieu Perreault also tallied for Winnipeg, which won for the sixth time in its past seven games. Jets goaltender Connor Hellebuyck made 33 saves.

Dubois took a drop pass from Nikolaj Ehlers and beat Allen high to the glove side from between the faceoff circles for the winner.

The Canadiens had tied the score with 1:24 left in regulation with Allen pulled for an extra attacker. Jeff Petry’s shot from the blue line was tipped by Drouin in the high slot, and the puck skittered past a screen Hellebuyck.

Stastny broke a 2-2 tie at 3:39 of the third period following a failed Montreal clearing attempt. Mark Scheifele kept the puck in the zone and got it to Stastny in the left corner. Stastny skated toward the net and sent a wrist shot over Allen’s right shoulder.

The Jets took a 2-0 lead in the first period.

Stastny opened the scoring at 10:39, when Blake Wheeler’s centering pass deflected off Stastny’s skate at the top of the crease and into the net.

Perreault made it 2-0 at 15:25 with an unassisted goal off a Montreal turnover. Perreault gained possession at the top of the faceoff circles and he skated to the net before putting a backhander past Allen.

The Canadiens tied the score with a pair of second-period goals.

Gallagher got Montreal on the scoreboard with a power-play tally at 9:53 of the period off a rebound.

The Canadiens tied the score at 2-2 at 16:53. Drouin flipped the puck toward the net from just inside the blue line, and it was tipped toward the net by Nick Suzuki. The puck went off Toffoli’s skate as he was setting up a screen at the top of the crease and deflected into the net.

The teams are scheduled to meet again Saturday night in Montreal.