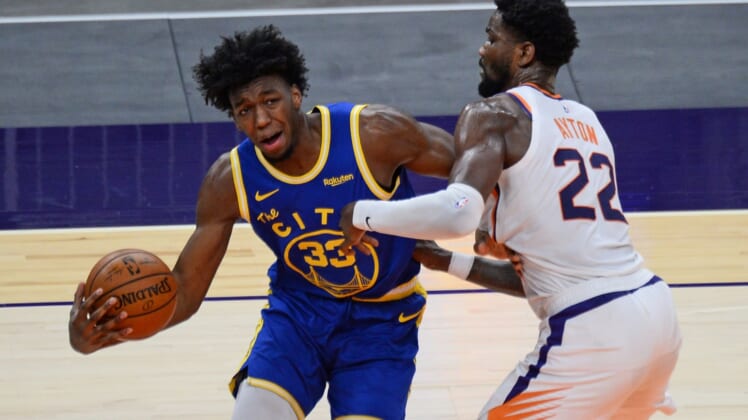 Mikal Bridges led seven players in double figures with 20 points Thursday night as the Phoenix Suns snapped a three-game losing streak with a 114-93 victory over the visiting Golden State Warriors.

On a night when both teams were playing for the second time in two days, the Suns demonstrated better depth, including a 12-point, 13-rebound double-double off the bench by Frank Kaminsky.

The Warriors’ Stephen Curry led all scorers with 27 points, but Golden State got just two other players into double figures while seeing their two-game winning streak come to an end.

Phoenix led by five at halftime and gradually pulled away in the second half. An 11-0 burst after Golden State had closed within 58-57 in the fourth minute of the third quarter opened a double-digit lead and allowed the Suns to coast home.

Bridges padded his point total by shooting 7-for-8 on free-throw attempts. Phoenix enjoyed a 21-6 advantage in points from the line in the teams’ first meeting of the season.

Crowder and Abdel Nader finished with 16 points apiece, Johnson and Chris Paul 13 each, and Deandre Ayton 12 for Phoenix, which avoided a winless four-game homestand.

The Suns had lost their three previous games in overtime and double-overtime to Denver and 102-97 to Oklahoma City on Wednesday night.

Ayton completed a second double-double for the Suns with 13 rebounds. Meanwhile, Kaminsky also found time for a game-high eight assists.

Andrew Wiggins had 16 points and Eric Paschall 12 for the Warriors, who were coming off a home win over Minnesota on Wednesday.

Paul and Curry had 13 points apiece in the first half, during which the Suns led by as many as 14 points.

Ayton had already recorded a double-double by halftime with 12 points and 11 rebounds, helping Phoenix take a 52-47 lead into the break.