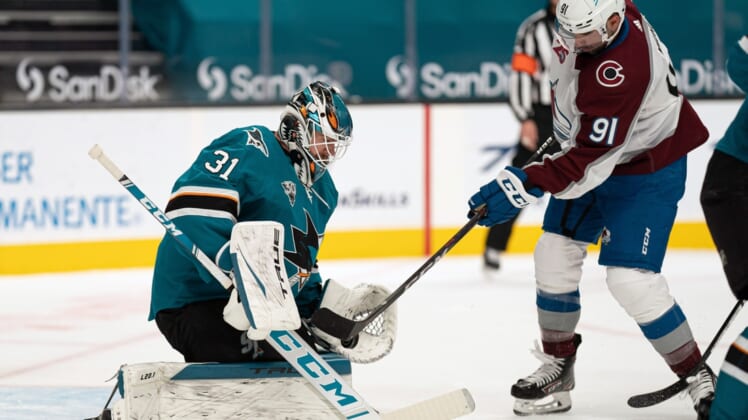 Mikko Rantanen had two goals and two assists, Gabriel Landeskog added a goal and three assists and Philipp Grubauer made 26 saves as the Colorado Avalanche defeated the host San Jose Sharks 4-0 Wednesday night to earn a split of their two-game series.

The game took an ugly turn with Colorado leading 2-0 in the third period when San Jose’s Joachim Blichfeld, playing in his first game of the season and the fourth of his NHL career, was assessed a match penalty for a hit to the head of Colorado’s Nathan MacKinnon with 11:52 remaining.

Blichfeld’s shoulder nailed MacKinnon in the chin as the Avalanche forward was trying to dig the puck out of his skates in front of the benches. MacKinnon was helped off the ice by one of the team’s trainers, and he went straight to the locker room and didn’t return.

A video review confirmed the major penalty, and Landeskog scored on a rebound 15 seconds into the five-minute major to help clinch the victory.

Rantanen capped the scoring at 14:34, corralling the puck behind the net following a missed shot and tallying on a wraparound.

Samuel Girard also scored for Colorado, which rebounded from a 6-2 loss to the Sharks on Monday.

Rantanen broke a scoreless tie at 14:24 of the second period with a slap shot from the top of the right faceoff circle.

The Sharks’ Evander Kane nearly tied the score on the power play late in the second period, but his shot from close range went off the right post.

Girard made it 2-0 at 5:29 of the third on a blast from the blue line that went just inside the right post. The goal was set up when Landeskog won a faceoff and Rantanen shoveled the puck back to Girard for a one-timer.

Avalanche defenseman Cale Makar, the reigning Calder Trophy winner as the NHL’s rookie of the year, missed his third straight game with an upper-body injury.