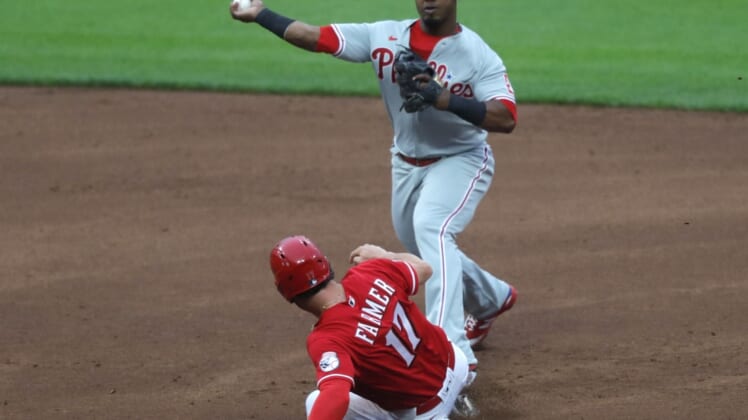 Rhys Hoskins homered, doubled and knocked in three runs and Ronald Torreyes had two hits, including a home run, and two RBIs.

Matt Joyce hit a grand slam in the ninth inning against Alex Blandino, an infielder, for a 14-run lead.

Alec Bohm had three hits and Jean Segura and Travis Jankowski added two each for the Phillies, who ripped a season-high 18 hits overall.

Phillies starter Aaron Nola tossed five-plus innings and gave up eight hits and three runs. Nola (4-4) struck out two and walked two while becoming the ninth pitcher in franchise history to reach 1,000 strikeouts for his career.

Tyler Naquin homered and drove in two runs and Nick Castellanos had two hits to extend his hitting streak to 18 games.

Reds starter Sonny Gray (1-4) lasted only 4 2/3 innings and allowed six hits and four runs while striking out eight and walking one.

The Reds jumped out to a 2-0 lead in the second inning when Naquin lined a two-run home run into the seats in right field.

The Phillies closed within 2-1 in the third after Torreyes hit a solo homer, his first since July 30, 2017. One out later, Herrera ripped a solo home run to center to tie the game.

In the fourth, the Phillies went ahead 3-2 when Bohm snapped an 0-for-12 skid with a two-out RBI single to left. Hoskins’ delivered an RBI double with two outs in the fifth for a 4-2 Phillies lead.

Cincinnati cut the deficit to 4-3 in the bottom of the fifth when Mike Freeman hit an RBI single to score Jonathan India.

McCutchen blasted a solo homer and Torreyes added an RBI double in the sixth to put the Phillies ahead 6-3. Herrera then hit his second homer, a two-run shot, and the Phillies led by five runs.

The Phillies continued to succeed against Amir Garrett as Hoskins hit a two-run home run for a 10-3 advantage after the six-run inning.

McCutchen’s second homer, a three-run shot in the eighth, gave the Phillies a 13-3 lead. It was the 18th career multi-home run game for McCutchen.