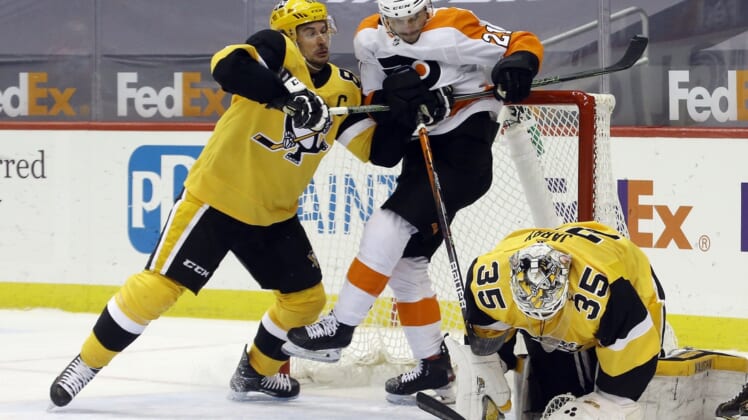 Claude Giroux scored his second goal of the game with 2:08 left as the visiting Philadelphia Flyers erased an early three-goal deficit to beat the Pittsburgh Penguins 4-3 on Thursday.

Kris Letang, Mark Friedman and Jared McCann scored in the first 3:57 for the Penguins. Tristan Jarry made 31 saves.

Friedman, playing his second game against his former team after being claimed by Pittsburgh off waivers, left in the second period after he got hurt on a hit from the Flyers’ Nolan Patrick.

Pittsburgh captain Sidney Crosby, who had an assist, returned after missing a game while he was on the COVID-19 protocol list. Conversely, Philadelphia’s Joel Farabee, who scored twice against the Penguins on Tuesday, was out after being placed on that list.

Letang opened the scoring at 2:46 of the first period. The Flyers’ Travis Sanheim swatted Letang’s floating shot from the right point, but that only helped send the puck past Elliott.

Friedman’s first NHL goal in his 12th game came 34 seconds later. On a rebound of Crosby’s shot, Giroux tried to bat the puck away, but it went to the slot, where Friedman swiped it under Elliott’s pads.

McCann made it three goals in 1:11 when he scored on a rebound of Kasperi Kapanen’s shot. McCann got the puck past Elliott while falling to the ice and despite the puck breaking his stick.

Giroux pulled Philadelphia to within 3-2 at 6:49 of the second. Jarry stopped Lindblom point blank, but Giroux got to the puck near the right post and popped it in.

Jarry turned the puck over from behind his net, and Lindblom’s fed Giroux in the slot. Giroux’s shot went in off Konecny at 13:37 of the third for the tying goal.