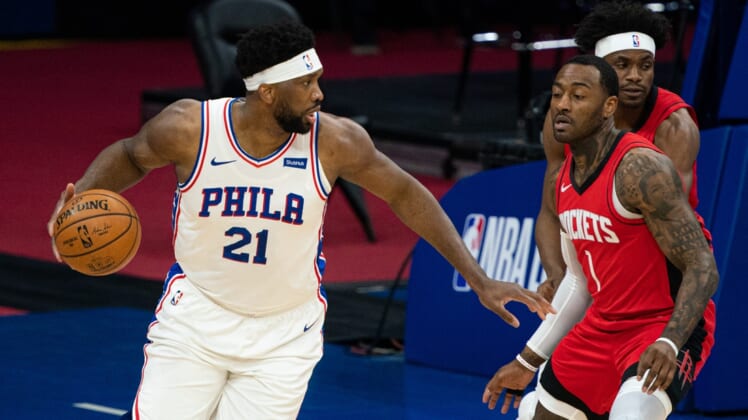 Embiid could be seen wincing in pain at times with back pain and was stretching on the baseline during some timeouts.

Tobias Harris contributed 24 points, 15 rebounds and five assists while Danny Green had 12 points for the Sixers, who snapped their three-game losing streak. Tyrese Maxey had 10 off the bench for the 76ers.

Ben Simmons was a late scratch with a stomach illness while top reserve Shake Milton remained out with an ankle injury.

John Wall led the struggling Rockets with 26 of his 28 points in the second half while DeMarcus Cousins and Jae’Sean Tate each had 19. Eric Gordon scored 17 and Ben McLemore 11 for Houston, which has dropped seven in a row.

The short-handed Rockets played without a number of key injured players such as Victor Oladipo, Christian Wood and P.J. Tucker. But they received a lift with the return of Gordon from a groin strain.

Furkan Korkmaz converted a tough layup with 5:35 left in the second quarter to boost the Sixers’ lead to 57-34.

When Embiid suck a short jumper nearly three minutes after the half, Philadelphia held a 29-point lead at 78-49.

The Rockets’ frustration was evident late in the third quarter down by 20 when Wall was whistled for a technical foul.

Philadelphia, which had eight turnovers in the third, still held a 96-79 advantage at the end of the quarter.

After the Rockets quickly got within 14 early in the fourth, Dwight Howard and Maxey each hit a pair of free throws to move the Sixers back ahead 100-82.

Amazingly, the Sixers went through a stretch with 14 straight missed field goals.

Embiid responded with a corner jumper to extend the lead to 112-106 as the Sixers held on down the stretch.