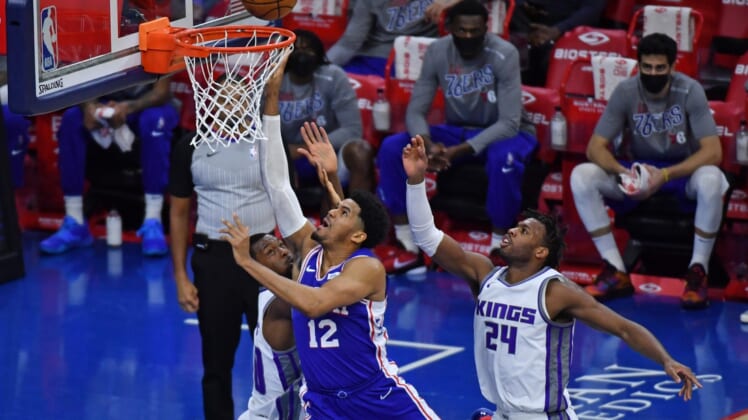 Tobias Harris had 29 points, 11 rebounds and eight assists and the host Philadelphia 76ers breezed past the Sacramento Kings 129-105 on Saturday.

Shake Milton added 28 points and Danny Green had 18 for the short-handed Sixers, who played without starters Joel Embiid (bone bruise on left knee) and Seth Curry, out with a sprained left ankle.

Tony Bradley scored 14 points with eight rebounds and Dwight Howard chipped in with 10 points and 13 rebounds off the bench.

Despite opening the game with their 17th different starting lineup, the Sixers cruised from the opening tip to the final buzzer. The Sixers improved to 19-4 at home.

The Kings had their two-game winning streak snapped.

The Sixers dropped in 6 of 8 shots from beyond the arc and bolted to a 42-21 lead at the end of the first quarter.

Philadelphia came out aggressive to open the second and the advantage quickly ballooned to 25.

Hield connected on six 3-pointers, but the Kings struggled to slice into the deficit, trailing 73-52 at halftime.

Harris paced the Sixers with 23 points by halftime.

The Kings looked a bit lethargic in the opening minutes of third as they fell behind 85-58. They played Friday on the road against the Boston Celtics and this was their fifth game of a six-game road trip.

When Milton hit a short shot from the corner with 6:13 left in the third, the Sixers pulled out to a 91-61 advantage. After an empty Kings possession, Green drained a trey and the Philadelphia lead was 34.

Sacramento made a slight run early in the fourth and Sixers head coach Doc Rivers brought Harris and Green back into the game. Harris’ jumper with 5:37 remaining extended Philadelphia’s lead to 119-99.

It was more than enough of a cushion to propel the Sixers to a win.