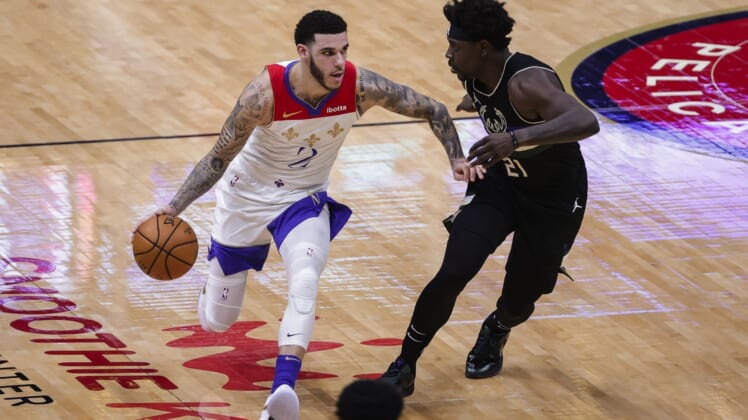 Ball, who started after missing the second half against Washington on Wednesday because of an ankle injury, made 7 of 13 3-pointers and Bledsoe made 7 of 14 against his former team. Brandon Ingram scored a team-high 28, Zion Williamson added 21 and Josh Hart had 15.

Steven Adams had 20 rebounds after having 18 against the Wizards.

The Pelicans won their second consecutive game after losing eight of their previous nine.

Giannis Antetokounmpo had 38 points and 11 rebounds to lead the Bucks. Jrue Holiday, playing his first regular-season game in New Orleans since the Pelicans shipped him to Milwaukee in a four-team offseason trade that included Bledsoe, scored 22, Khris Middleton and Brook Lopez had 16 each and Donte DiVincenzo had 10.

The Pelicans made 21 of 48 3-pointers, attempting a season-high for the second consecutive game, and the Bucks made 13 of 35.

Ball made back-to-back 3-pointers to start the third quarter and gave New Orleans a 74-47 lead.

The Pelicans led by 28 on several occasions before Milwaukee cut into the deficit late in the quarter.

Milwaukee got as close as nine points before New Orleans scored the final five points to take a 103-89 lead at the end of the quarter.

The Bucks didn’t make a fourth-quarter run until they got within five in the final minute, but they never got it to a one-possession game.

Milwaukee’s Bobby Portis scored the first three points of the second quarter, but the Pelicans increased the lead to 57-29 midway through the period.

New Orleans led by as many as 29 points before taking a 65-45 lead into halftime.