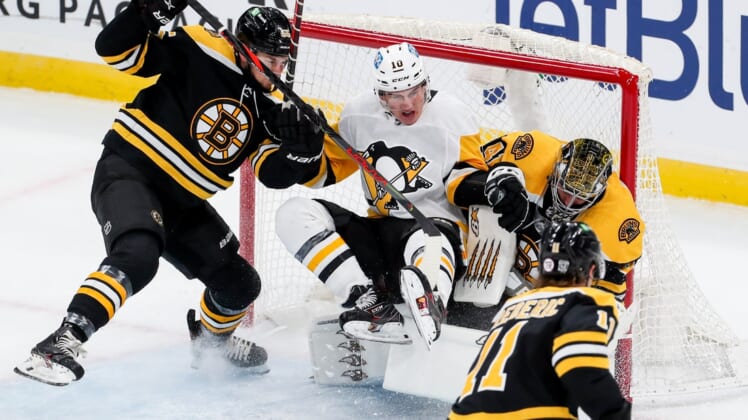 Patrice Bergeron scored twice, including on the power play in the third period, as the Boston Bruins downed the visiting Pittsburgh Penguins 4-1 Thursday night.

Chris Wagner and Sean Kuraly also had goals as the Bruins extended their winning streak to four. Jaroslav Halak made 16 saves.

Boston completed a two-game home sweep of Pittsburgh after a 3-2 victory in overtime Tuesday. Unlike in that contest, when the Penguins rallied from 2-0 down in the third, the visitors lacked any punch late.

Held to 11 shots over the first two periods, Pittsburgh went a man short when John Marino was whistled for interference 55 seconds into the third. Bergeron’s second goal 45 seconds later made it 4-1 Bruins, and the Penguins hardly threatened the rest of the way.

Pittsburgh played without top defenseman Brian Dumoulin, who sustained a lower-body injury Tuesday. His replacement, Kevin Czuczman, had the puck bounce off his stick to an unmanned Wagner in the slot for Boston’s first goal at 6:10 of the first.

The Penguins knotted the score at 15:03 when Ceci went five-hole to take advantage of a lucky bounce his way during a line change for his first marker since Oct. 4, 2019. But the Bruins pulled back ahead 2-1 at 18:53 when a flipping puck put toward net by Anders Bjork bounced in off the leg of Kuraly.

Bergeron’s first goal came on the backhand on a second chance after his initial attempt clanked off the skate of Kris Letang and back to him for a 3-1 margin at 8:13 of the second.

Jake DeBrusk (lower body) missed the contest for the Bruins after getting injured on a Sidney Crosby hip check Tuesday. Matt Grzelcyk had an assist in his return from two games missed with a lower-body injury but was unavailable during the third.