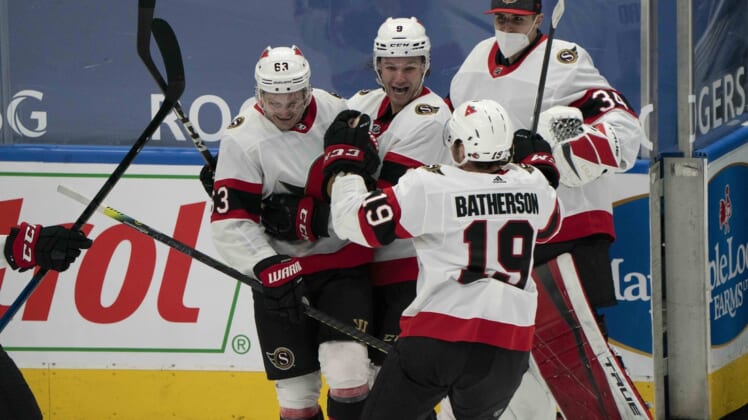 Evgenii Dadonov tied the game late in regulation before scoring on a breakaway in overtime as the visiting Ottawa Senators overcame a four-goal deficit to defeat the Toronto Maple Leafs 6-5 on Monday night.

Connor Brown had a goal and an assist for Ottawa. Drake Batherson, Nick Paul and Artem Zub also scored goals for the Senators, who fell behind 5-1 late in the second period before completing a furious rally. Thomas Chabot added two assists, including one on Dadonov’s game winner at 2:19 of overtime.

Auston Matthews had two goals and an assist for Toronto, while Joe Thornton added a goal and an assist. Travis Boyd and Pierre Engvall also scored in the opener of a three-game series.

Batherson got the Senators back within 2-1 on a pass from Tim Stutzle. It was his second of the season.

Engvall scored his first of the season at 1:49 of the second period to give the Maple Leafs a 3-1 lead, converting Alexander Kerfoot’s feed. TJ Brodie’s stretch pass started the play.

Thornton scored his second this season for a 4-1 advantage at 9:51 of the second despite losing control of the puck before it slithered over the line off a skate. Matthews made the pass from the right boards to the front of the net.

Matthews then scored his 13th at 19:01 of the second period for a 5-1 lead while Toronto had a two-man advantage.

Less than a minute later, Paul knocked in Austin Watson’s rebound for his third goal of the season and Ottawa’s first while shorthanded.

As Zub left the penalty box less than a minute into the third period, he took Chris Tierney’s pass and scored on the breakaway for his first NHL goal. It brought Ottawa within 5-3.

Brown scored his third from the left circle at 5:52 of the final period to cut the Senators’ deficit to 5-4. Dadonov tied the game with his fifth of the season at 17:59 with Hogberg removed for an extra attacker.