After the Mavericks (0-1) scored the game’s first point on a David Azore free throw, the Cowboys (1-0) led the rest of the way jumping out to a 17-3 lead and leading by as many as 47 points.

Cisse was one of five Oklahoma State players to score in double figures as the Cowboys shot 33-for-70 (47.1 percent) from the field including 9-for-25 from 3-point range.

The Cowboys outrebounded the Mavericks 49-28 and held them to 2-for-20 shooting from 3-point range and 20-for-53 (37.7 percent) overall thanks to a suffocating defense from the start. 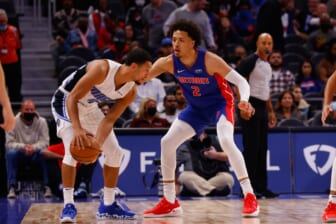 Playing its first game following the departure of NBA No. 1 overall pick Cade Cunningham, Oklahoma State had little trouble on the offensive end as guard Avery Anderson III and Matthew-Alexander Moncrieffe each had 13 points.

It was a rough debut for new UT Arlington coach Greg Young, who was promoted after former coach Chris Ogden was hired as an assistant coach at the University of Texas. A 35-year coaching veteran, Young is entering his 13th season overall with the program.

Oklahoma State started what will be a difficult season after it found out last week the NCAA was rejecting its appeal of a postseason ban levied in 2020 and banning the Cowboys from playing in the 2022 NCAA tournament.

The penalty stemmed from a violation involving former associate head coach Lamont Evans, which was uncovered by the 2017 FBI investigation into corruption in college basketball. Evans was found to have accepted bribes to steer players from Oklahoma State and South Carolina to certain agents and financial advisers. Evans was subsequently sentenced to three months in prison in June 2019.