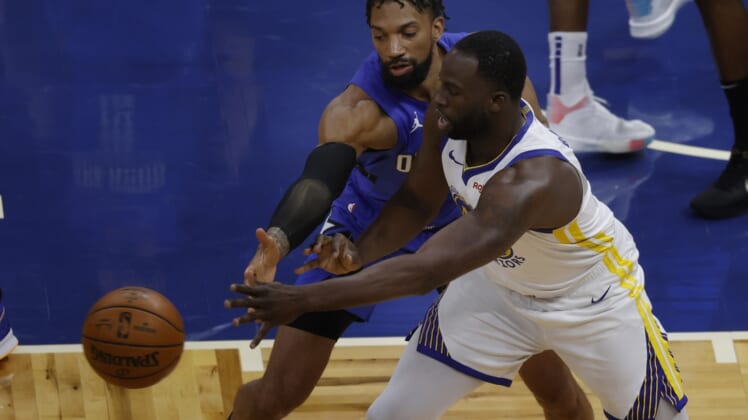 Orlando’s Nikola Vucevic recorded his third career triple-double with 30 points, 16 rebounds and 10 assists. Evan Fournier had 28 points and Terrence Ross 24 for the Magic, who blew a 17-point lead before rallying from 13 down in the fourth quarter.

Down 106-93 with 8:50 to play, the Magic caught fire offensively after Fournier and Michael Carter-Williams, neither of whom had played in last week’s loss, hit 3-pointers.

Golden State retained a 112-106 lead after a Damion Lee 3-pointer with 5:24 to go, but Okeke countered with a trey, and with the Magic having closed within one, buried another for a 116-114 advantage the hosts never relinquished.

Curry nailed a pair of 3-pointers in the final minute to give Golden State a chance, but he misfired on a potential game-tying 27-footer with 3.5 seconds left, allowing the Magic to hold on.

Okeke finished with 11 points for the Magic, who have won three of four.

Kelly Oubre Jr. had 26 points for the Warriors, who for the seventh time this season failed to add a third win to a two-game winning streak.

Andrew Wiggins added 16 points while Lee and Mychal Mulder had 10 apiece for Golden State, which was playing the opener of a back-to-back. The Warriors move on to Charlotte to face the Hornets on Saturday night.

Trailing by 17 in the third quarter, the Warriors used a 43-point explosion in the period to get back in the game, then got 3-pointers from Lee and Kent Bazemore to go up 106-93 with 8:50 to go before the Magic rallied.

The Magic dominated the first half, building a 64-51 lead at the break behind the scoring of Fournier (22) and Vucevic (15). They combined to hit 16 of their 24 shots in the opening 24 minutes.