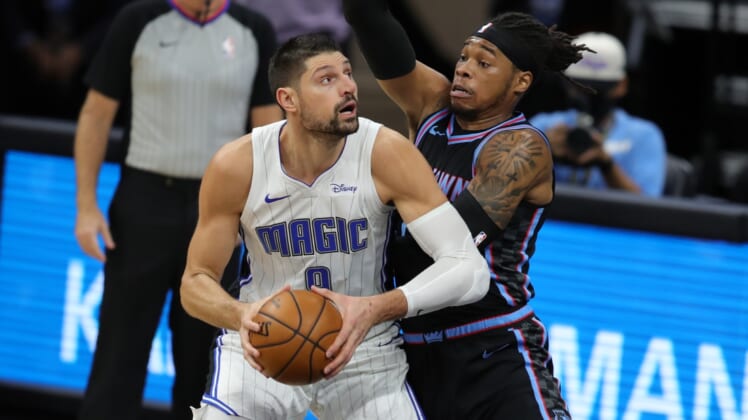 One day after suiting up just eight players and then losing Frank Mason III after four minutes, the Magic used a nine-man roster to outlast a Kings team that ruled out De’Aaron Fox and Marvin Bagley III shortly before game time.

Orlando outscored Sacramento 45-36 on 3-pointers, with Terrence Ross complementing Vucevic’s six with four of his own in an 18-point performance.

Buddy Hield had 19 points to lead the Kings, who have lost two straight after winning four in a row.

Hassan Whiteside had 16 points while Tyrese Haliburton had 14 to go with a team-high seven assists for Sacramento, which has opened a five-game homestand with a pair of losses.

The Kings’ Nemanja Bjelica totaled 15 points and a team-high nine rebounds. Harrison Barnes had 13 points, Cory Joseph 12 and Richaun Holmes 10 for the Kings, who won 121-107 at Orlando on Jan. 27.

The absences of Fox and Bagley were surprises. Fox bruised his knee at practice on Thursday while Bagley reported soreness in his left calf on Friday.

After a tightly contested first half, the Magic turned a five-point advantage at the break into a 92-72 lead at the 5:14 mark of the third quarter. Carter-Williams, who was playing for the first time since sustaining a sprained foot on Jan. 4, contributed 15 points to the 28-13 burst.

Sacramento got as close as nine before the end of the third quarter, but the Magic kept the hosts at arm’s length, thanks mainly to Vucevic.

The veteran big man, whose career-high of 43 points came last week against Chicago, dropped in 17 of his 22 shots, including six of his eight 3-point attempts.

Orlando had suffered losses on the first two stops of its four-game Western trip, falling at Portland on Tuesday and then 111-105 at Golden State on Thursday night on the front end of a back-to-back.