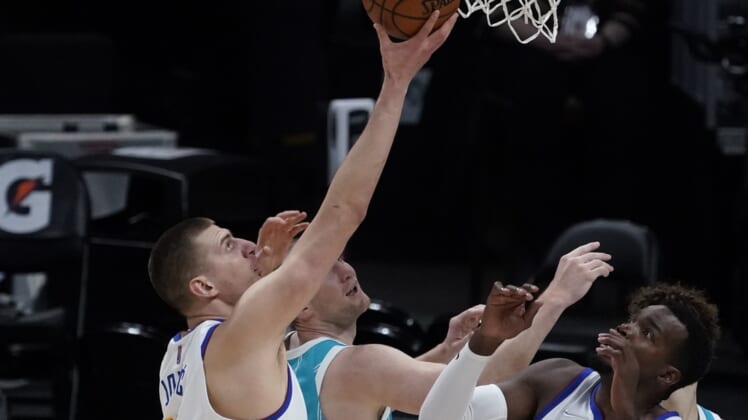 Will Barton scored 23 points, Jamal Murray had 19 and PJ Dozier added 13 for the Nuggets. Facundo Campazzo dished out 10 assists, who earned their seventh win in eight games.

Terry Rozier led Charlotte with 21 points and Malik Monk added 16, all in the fourth quarter when the game was out of reach. LaMelo Ball contributed 14 points for the Hornets, whose four-game winning streak ended.

The Hornets jumped out to a nine-point lead in the first five minutes of the game. Barton, as he did Monday in a victory over the Indiana Pacers, had a strong first quarter and helped Denver get back in it in a hurry. His 3-pointer ignited nine straight Denver points to put the Nuggets in the lead, 23-21.

Miles Bridges had a dunk and a layup to pull Charlotte within a point heading into the second quarter.

JaMychal Green made two short jumpers, Dozier hit a pair 3-pointers and Murray drained another from deep to put Denver ahead 39-30. Two 3-pointers from the Hornets cut the deficit to three, but the Nuggets slowly built their lead back up.

Porter had a layup, Murray sank a 3-pointer and Jokic tipped in a basket for Denver, which closed the first half with seven straight points to lead 57-45 at intermission.

The Nuggets continued their surge after halftime. Barton hit a pull-up jumper, Paul Millsap made a layup, Jokic scored on a shot in the lane and Porter dunked to put Denver ahead by 65-45.

The teams traded baskets for a few minutes to keep it a 20-point game before Murray hit a trio of 3-pointers and Porter made another from behind the arc to spark another Nuggets surge and produce a 95-67 lead after three quarters.

Jokic had seven assists in the period to notch another triple-double, his 11th of the season and the 52nd of his career.

Denver led by as many as 34 points in the fourth quarter.