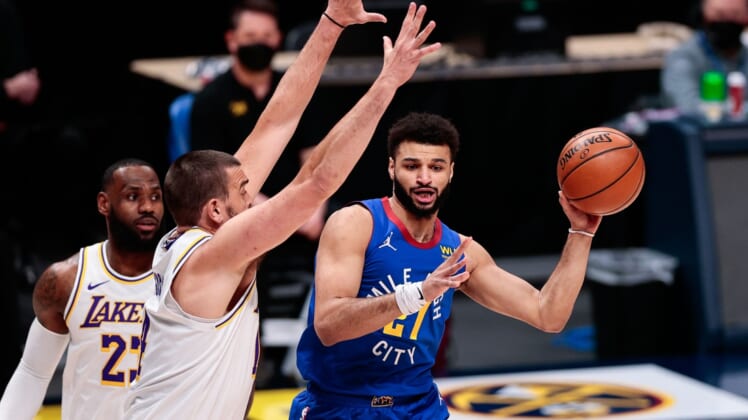 Zeke Nnaji had 16 points, Facundo Campazzo scored 15 and Monte Morris and Paul Millsap had 10 each for the Nuggets.

LeBron James had 22 points, 10 rebounds and nine assists for Los Angeles, which lost forward Anthony Davis when he aggravated a right Achilles injury.

Davis left with 2:39 left in the second quarter after he bumped legs with Jokic. He stayed in to shoot free throws but left with tendonosis of the right Achilles. ESPN reported he will have an MRI done Monday.

Davis, who finished with 15 points in 14 minutes, missed two games last week with an Achilles injury.

Kyle Kuzma scored 19 and Alex Caruso 11 for the Lakers, who had their seven-game winning streak snapped.

Denver played without Gary Harris (adductor), P.J. Dozier (hamstring) and Will Barton (personal) and then lost Millsap after he was hit in the thigh on a screen by Caruso late in the second quarter.

Despite the shortened rotation, the Nuggets led by 12 at halftime and increased it in the third quarter. After Marc Gasol hit a corner 3-pointer, Denver went on a 9-2 run, capped by a five-point trip. Campazzo was fouled on a 3-pointer and hit the free throw, and Murray hit a technical free throw to make it 97-79.

Denver led by as many as 21 in the fourth quarter and cruised to the win.

The game was tied at 33 after the first quarter and the Lakers grabbed a 49-42 lead on a three-point play by Davis midway through the second, but the Nuggets came back strong in the final 6:19 of the half.

Campazzo and Michael Porter Jr. hit 3-pointers and Jokic made four free throws in a 15-2 run that put Denver ahead 60-53. Davis then was fouled by Jokic and after hitting two foul shots gingerly walked to the locker room.

Denver then scored 10 straight points and took a 73-61 lead into the break.