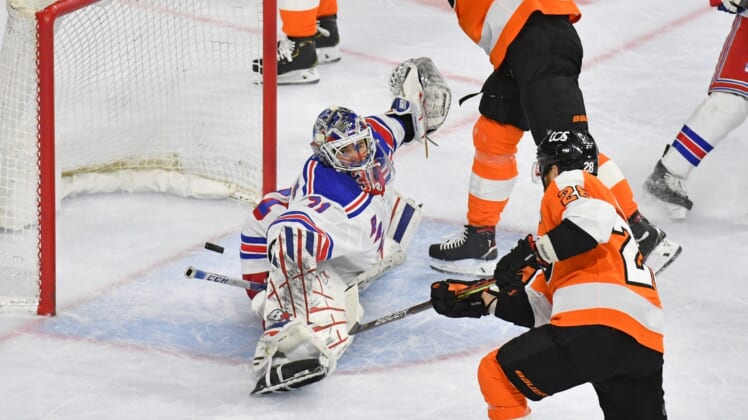 Mika Zibanejad had three goals and three assists to lift the New York Rangers past the host Philadelphia Flyers 8-3 on Thursday.

Zibanejad has scored six goals and totaled 12 points in consecutive games against the Flyers.

Ryan Strome added one goal and three assists while Pavel Buchnevich added two goals and K’Andre Miller and Filip Chytil had one goal each for the Rangers, who won their third in a row.

Kevin Hayes and Sean Couturier each had a goal and an assist while Claude Giroux also scored for the Flyers.

Flyers goaltender Carter Hart gave up five goals and was pulled for Brian Elliott at 2:06 of the second period. Elliott smashed his stick against the wall going down the tunnel at the end of the game.

The Rangers jumped out to a 1-0 lead at 8:01 of the first period when Strome received a crisp pass from Artemi Panarin and tapped the puck past Hart.

Just 52 seconds later, the Rangers went ahead 2-0 when Buchnevich completed a 2-on-1 breakaway.

New York extended their advantage to 3-0 at 13:36 of the first when Zibanejad redirected a slap shot from Fox into the net.

Giroux nearly put the Flyers on the scoreboard, but Shesterkin made a stellar save from point-blank range at 14:43 of the first.

The Rangers came out aggressive in the second as Zibanejad gave them a 4-0 lead on the power play just 54 seconds into the period.

Zibanejad registered the hat trick at 2:06 with another power-play goal on a nasty slap shot. Hart was then pulled for Elliott.

The Flyers began the third on a power play, but Buchnevich scored short-handed for a 7-2 lead just 33 seconds in.

Couturier responded at 1:28 to close the Flyers within 7-3.