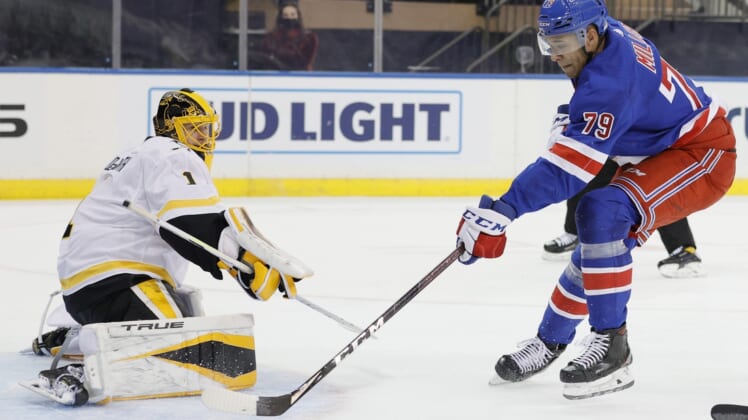 The Rangers beat the Penguins for the first time in four meetings this season after losing the first three contests by one goal.

On the winning goal, defenseman Adam Fox faked a pass and instead took a rising shot from the left shot. Kreider went to the net and stood to the left of goaltender Casey DeSmith and with his back turned, deflected the shot over DeSmith’s right shoulder.

Kevin Rooney scored New York’s second-period goal while Artemi Panarin got an empty-netter right before the final buzzer and collected two assists for the Rangers, who won after announcing defenseman Tony DeAngelo would never play for the team again, a day after he was placed on waivers.

Igor Shesterkin made 25 saves in his best outing of the season, helping the Rangers kill off six penalties. He made a point-blank stop on Jake Guentzel during a late power play and then denied Evgeni Malkin after the Penguins pulled DeSmith for the extra attacker.

Jason Zucker scored the lone goal for Pittsburgh, which took its first regulation loss in the past 11 meetings with the Rangers.

DeSmith finished with 21 saves. Before allowing Kreider’s go-ahead goal, DeSmith denied him on two point-blank chances with about five minutes left in the second period.

Pittsburgh took the lead 9:05 into the first on Zucker’s second goal in as many games.

Malkin retrieved a loose puck from the right corner and passed to Chad Ruhwedel, whose wrist shot from the right point sailed high and behind the net. Zucker retrieved it, circled around the left side, beat defenseman K’Andre Miller and lifted the puck over Shesterkin’s left pad.

Pittsburgh nearly went up 2-0 with 6 1/2 minutes left when Sidney Crosby hit the crossbar with a backhander on a breakaway after knocking the puck out of midair.

With 2:18 left in the first, the Rangers evened the game on a delayed penalty when Panarin’s slap shot from the left side was redirected to Rooney, who tucked the rebound into the vacated right side of the net.