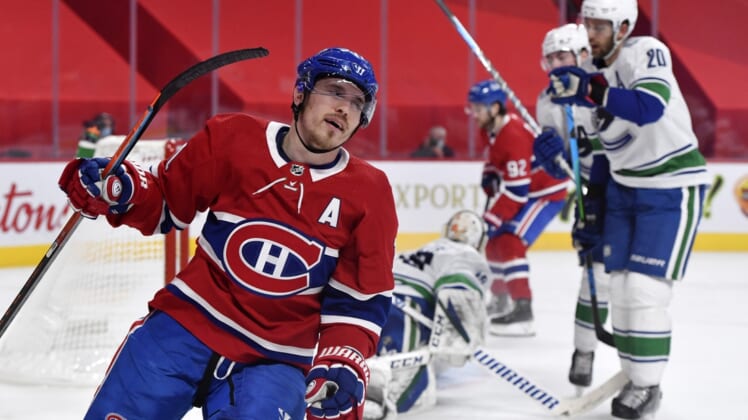 Jeff Petry had two goals and an assist to lead the Montreal Canadiens to a 6-2 rout of the visiting Vancouver Canucks on Monday.

The Canadiens are 3-0-1 against Vancouver this season, and they scored at least five goals in each of the games. Montreal has an 18-1-4 record in 23 games against the Canucks dating back to the 2009-10 season.

The loss snapped Vancouver’s four-game winning streak. The Canucks showed little of the form that carried them during their streak, as they had multiple turnovers that led to Montreal goals.

Nick Suzuki and Artturi Lehkonen each had a goal and an assist for Montreal. Brendan Gallagher and Tyler Toffoli scored the Canadiens’ other two goals.

Lehoknen’s goal was a short-handed marker, continuing the Canadiens’ ability to strike during opponents’ power plays. Montreal already has six short-handed goals, tying its mark from the entire 2019-20 season.

Toffoli scored his team-high seventh goal of the season during a Canadiens power play in the second period. Toffoli has six goals and two assists in four games against Vancouver this season.

Adam Gaudette and Jay Beagle scored for the Canucks.

Petry matched his career high for goals in a game and hit the three-point plateau for the seventh time in his 11-year NHL career.

At 16:58 of the first period, Petry took a pass in the slot and fired a well-placed shot through traffic for his first goal of the game, giving Montreal a 3-1 lead.

Petry’s follow-up score came 8:40 into the second period for a 5-1 advantage. Corey Perry did much of the work in taking the puck to the net before dropping a slick pass to Petry in front of the net.

Perry earned an assist for the 800th point of his NHL career.

Braden Holtby made 34 saves on 40 shots as the Vancouver goalie received a scant amount of help from his defense.

The teams meet again on Tuesday in Montreal.