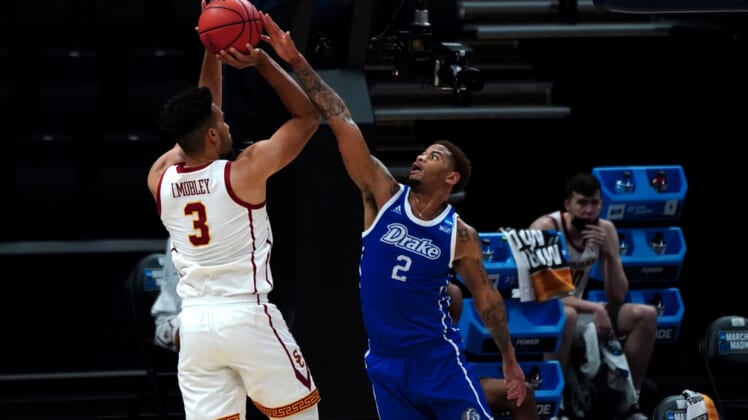 Evan Mobley recorded a double-double with 17 points and 11 rebounds, while Isaiah Mobley added 15 points, as No. 6 seed Southern California pulled away from No. 11 seed Drake down the stretch for a 72-56 victory in NCAA Tournament West Region First Round action at Indianapolis.

USC (23-7) led most of the way, building a double-digit-point lead in the second half. Drake tried to make it interesting late when Joseph Yesufu made one of his six 3-pointers with 6:37 remaining to pull the Bulldogs within seven points.

The Trojans responded quickly and decisively when Drew Peterson and Tahj Eaddy made back-to-back 3-pointers that extended the lead to 63-50 with 5:18 remaining.

Eaddy also helped key the second half defensive effort for the Trojans, matching up with Yesufu after the Bulldogs guard made six of his first seven field-goal attempts.

Drake (26-5) went cold in the second half, scoring just six points over the final 6:37 and 19 for the final 20 minutes. The Bulldogs shot 29.4 percent for the game, a byproduct of the Trojans’ height advantage in contesting Bulldogs looks.

USC blocked seven shots, three by Evan Mobley. Drake grabbed 17 offensive rebounds off its misses, with each of the Bulldogs starting five grabbing at least two.

They struggled converting the opportunities into points, however. Yesufu scored a game-high 26 points but no other Bulldogs player scored more than six.

USC shot 50 percent from the floor (29 of 58), which was enough to overcome a dismal performance at the free-throw line. The Trojans went just 8 of 15 (53.3 percent) from the stripe.

With the victory, USC advances to face West Region No. 3 seed Kansas on Monday.