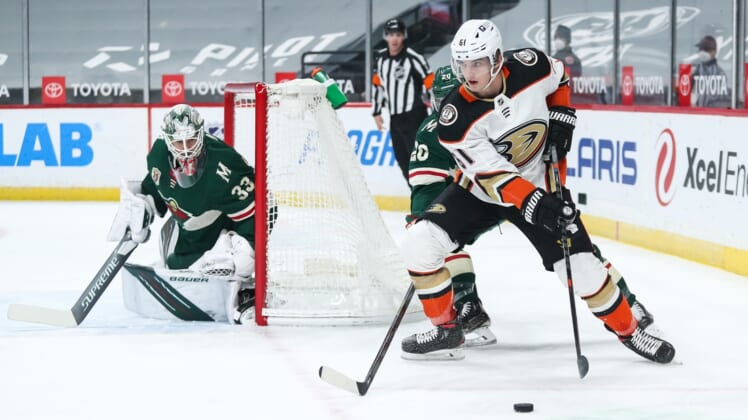 Ryan Suter and Nick Bjugstad scored for the Wild, who avoided what would have been their first three-game losing streak of the season.

Troy Terry scored and Ryan Miller had 21 saves in his sixth straight start for the Ducks, who have not won in regulation in their past 18 games, going 3-12-3 in that span.

Miller came out of the crease to defend a shot from the slot by Carson Soucy, but it was blocked by Anaheim defenseman Jacob Larsson. The puck caromed to the side, and Bjugstad was there to shoot it into the open net.

Terry established a career-best, four-game point streak when he scored at 5:17 of the second period for a 1-0 Anaheim lead.

Minnesota forward Mats Zuccarello had intercepted a pass near his own blue line, but he slipped as he turned up ice.

Terry and Suter converged on the puck, but Terry poked it toward the Minnesota net and for a short breakaway. He scored on a backhand after faking out Talbot.

The Wild came in with the worst power play in the NHL at 8.5 percent, but they scored on their third man advantage to tie the score 1-1 at 16:21 of the second period.

Cam Fowler was in the penalty box for a delay-of-game penalty when Suter scored on a point shot through traffic for his first goal of the season.

Marcus Johansson returned for the Wild after missing the previous 16 games with an upper-body injury. He played 13:37 and had an even rating.

Minnesota’s Matt Dumba missed his second straight game due to a lower-body injury.

The Ducks welcomed back Josh Manson after he missed six games with a lower-body injury. He played 12:36 and had an even rating as one of seven defensemen who suited up for Anaheim.