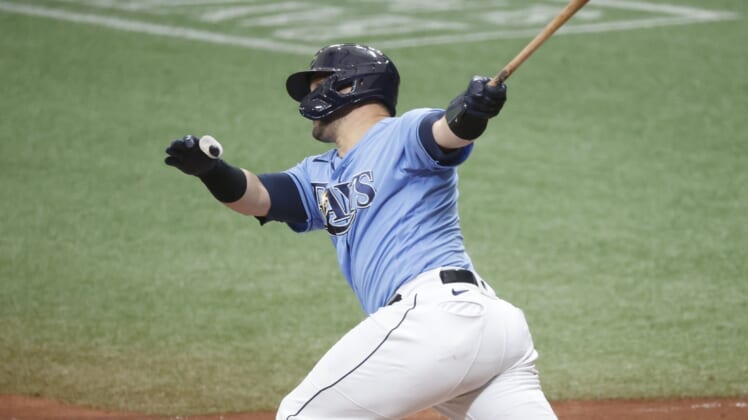 Mike Zunino homered, doubled and drove in two runs to lift the host Tampa Bay Rays past the Philadelphia Phillies 6-2 on Sunday.

Brett Phillips added a home run and single on his 27th birthday for the Rays, who swept the two-game series and have now won 15 of their past 16 games.

Austin Meadows also had a double and three walks.

The Rays sent Collin McHugh to the mound to start and he threw just 14 pitches and allowed two hits in two-thirds of an inning before being lifted for Josh Fleming.

Jean Segura, Brad Miller and Andrew Knapp had two hits each for the short-handed Phillies, who are without Bryce Harper (wrist), Didi Gregorius (elbow) and Roman Quinn (left Achilles).

Phillies starter Zach Eflin lasted only 4 2/3 innings and gave up four runs and six hits and had five strikeouts and one walk. It was the first time in 11 starts that Eflin (2-5) was unable to toss at least six innings.

The Rays went ahead 2-0 in the second inning when Zunino lined a two-run home run to left field.

The Phillies sprinkled four hits, all singles, through the first three and left three on base.

Tampa Bay took a 3-0 advantage in the fifth when Phillips lofted a solo homer to right. Ji-Man Choi added an RBI double against Ranger Suarez for a 4-0 lead.

J.T. Realmuto hit a sacrifice fly to center and Miller added an RBI double in the sixth to close the Phillies within 4-2.

The Rays tacked on two more runs for a 6-2 lead in the seventh highlighted by Joey Wendle’s RBI single along with another run on a throwing error by Brad Miller.

Miller led off the ninth with a single to right and Andrew McCutchen grounded out on a check swing. Alec Bohm walked and pinch hitter Matt Joyce struck out. Knapp singled to load the bases but Odubel Herrera flied out to the warning track in center to end the game.