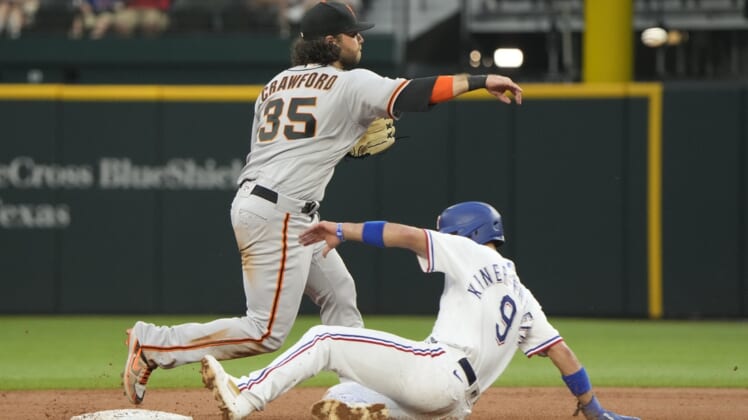 Brandon Crawford had two homers and four RBIs, Mike Tauchman belted his first career grand slam, and the visiting San Francisco Giants rallied for a 9-4 win over the Texas Rangers in the opener of a two-game interleague series on Tuesday.

The Giants trailed 4-2 with two outs in the eighth before Tauchman broke a 2-for-25 slump with his line-drive homer down the right field line off Josh Sborz.

Crawford added a three-run blast in the ninth off Taylor Hearn for the fifth multi-homer game of his career.

LaMonte Wade Jr. had three hits and Jose Alvarez (2-1) earned the victory in relief for the Giants, who won for the eighth time in their last 10 games.

San Francisco led 1-0 before Gallo opened the bottom of the second with a 390-foot homer off Alex Wood, who allowed four runs and five hits in 5 1/3 innings.

Crawford made his 1,326th appearance at shortstop, setting the record for the most games at the position in Giants history.

Crawford also put the Giants ahead 2-1 with a solo blast off Jordan Lyles with one out in the sixth. Lyles allowed two runs (one earned) over six innings.

The Rangers rallied with three runs in the bottom half of the inning. Isiah Kiner-Falefa scored on Adolis Garcia’s one-out double off Wood, who was replaced by Jarlin Garcia.

Gallo then walked to load the bases before Nick Solak drove in two runs with a line drive into the left field corner. Gallo later left the game as a precaution with right groin tightness.

Brandon Belt had three hits and three runs scored after missing the previous 11 games with a left oblique strain. Giants outfielder Alex Dickerson exited with back tightness after batting in the first inning.

Kiner-Falefa went 3-for-4 from the leadoff spot for Texas, which fell a season-low 16 games under .500.