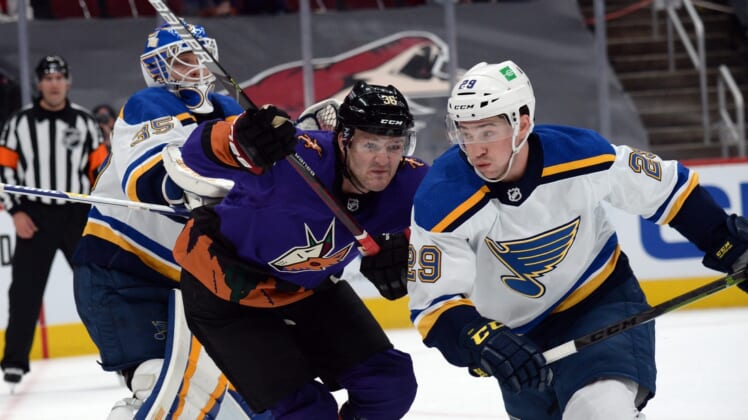 This was the sixth consecutive game between with these teams, due to COVID-19 postponements elsewhere. They will play their seventh straight game Monday.

Garland got the Coyotes on the board just 21 seconds into the game. He stole the puck from defenseman Torey Krug and snapped a shot through Husso from the right circle.

Clifford tied the game at 5:46 of the first period with a snap shot from the right faceoff dot. Jacob de la Rose set up the goal after stealing the puck in the right corner.

Sanford put the Blues up 2-1 with 6:38 left in the period. He took a pass from Barbashev and scored from the left circle through linemate Austin Poganski’s screen.

The Coyotes tied the game when Hayton took Clayton Keller’s pass, cut into the left circle and fired a shot through Garland’s screen 5:27 into the second period.

Schmaltz tied the game by driving to the right post and converting a caroming point shot 1:50 into the third period.

Hunt put the Coyotes up 4-3 with 8:37 left, jamming home Christian Fischer’s centering pass to the top of the crease.

But three minutes later, Kyrou scored off the right wing on a 2-on-1 break to tie the game 4-4 and force overtime.

Hoffman decided the game with a snap shot from the right circle 1:49 into the overtime.