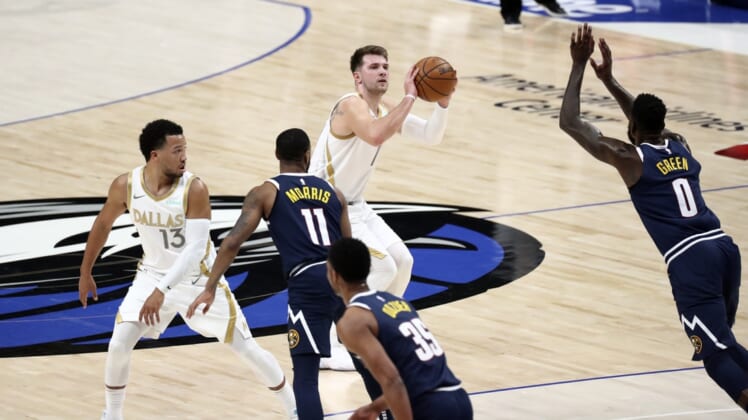 JaMychal Green had 17 points and eight rebounds, Jamal Murray scored 16 before being ejected and Gary Harris scored 10 for Denver, which has won the first three games of a five-game road trip.

Murray was hit with a flagrant-2 foul with 4:51 left in the third quarter for excessive contact to Tim Hardaway Jr.’s groin.

Denver led by seven when Murray was ejected, but Hardaway tied it on a dunk, part of his personal run of nine consecutive points.

Dallas continued its surge, going ahead 90-83 on a runner in the lane by Doncic. The Nuggets closed the third quarter on a 9-4 run to get within 94-92 heading into the fourth.

Green opened the fourth with a 3-pointer, Monte Morris scored on a layup and Green hit two free throws to give the Nuggets a 99-94 lead. It was 102-97 before Johnson hit a 3-pointer. Green replied with a layup, but Doncic hit two jumpers and Johnson a layup to put the Mavericks ahead 106-104 with 3:33 to go.

The Nuggets responded with seven straight points to lead by five with 2:21 left. After Porzingis split a pair of free throws to make it 111-107, Porter hit a corner 3-pointer with 41.8 seconds left.

Hardaway made one of two free throws before Denver’s Will Barton drained two from the line to seal the outcome.

Murray scored 16 first-half points to help Denver take as much as a 13-point lead. Doncic, who had 21 in the first half, hit a 3-pointer with 34.3 seconds left to cut the deficit to nine, but Murray answered with one from long range to give the Nuggets a 70-58 lead heading into intermission.