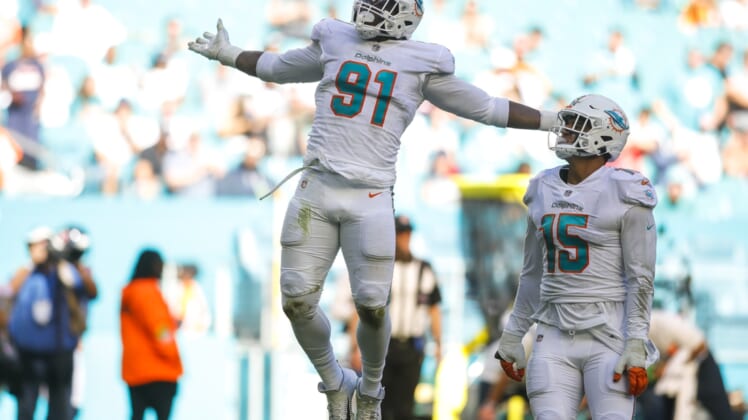 Backup quarterback Jacoby Brissett, who hadn’t won a game since 2019, helped the Miami Dolphins snap a seven-game losing streak with a 17-9 victory over the visiting Houston Texans on Sunday afternoon.

Neither offense was sharp in a nine-turnover game. The final turnover sealed Miami’s victory as Texans tight end Jordan Akins fumbled with 2:28 left in the game. Eric Rowe forced the fumble, and it was recovered by Brandon Jones.

Miami (2-7) turned the ball over five times but still managed its first home win in five tries. Brissett completed 26 of 43 passes for 244 yards, one touchdown and two interceptions. Miami also lost three fumbles, including one by Brissett.

For the Texans, Tyrod Taylor was intercepted three times as Houston (1-8) extended the longest active losing streak in the AFC to eight games. It’s Houston’s worst skid since 2013, and the Texans are 0-5 on the road this season.

Taylor, who led Houston to a season-opening win but then injured a hamstring in the next game, returned to action for the first time since Sept. 19. He completed 24 of 43 passes for 240 yards.

Miami played without starting quarterback Tua Tagovailoa, who has a fractured and swollen middle finger on his throwing hand, which prevents him from properly gripping the ball.

On its first possession, Houston reached Miami’s 16. But safety Jones blitzed, causing Taylor to float a pass to the end zone, which was intercepted by rookie safety Jevon Holland.

That was Taylor’s first interception of the season, and Miami turned it into a 12-play, 80-yard touchdown drive. The payoff was Myles Gaskin’s 6-yard run on a direct snap.

Houston answered with a pair of second-quarter field goals as Ka’imi Fairbairn hit from 31 and 40 yards. Both field goals were set up by Dolphins fumbles, by Gaskin (recovered by Roy Lopez) and by punt returner Holland (recovered by Kevin Pierre-Louis).

Miami took a 17-6 lead into halftime by scoring twice in the final 73 seconds. Jason Sanders made a 42-yard field goal, and, after linebacker Jerome Baker’s interception, Brissett fired a 5-yard TD pass to Mack Hollins on a key third-down play.

After a scoreless third quarter, Houston cut its deficit to 17-9 on Fairbairn’s 20-yard field goal with 11:35 left in the fourth. That capped a massive, 14-play, 92-yard drive that fizzled at Miami’s 1-yard-line on a Taylor incompletion under heavy pressure.