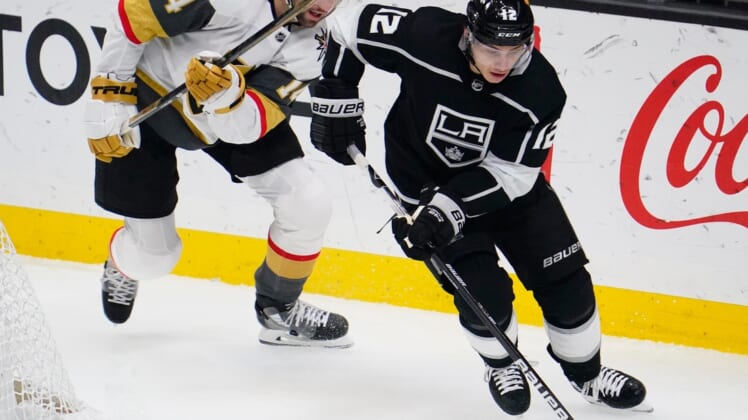 Max Pacioretty scored two goals and Robin Lehner made 23 saves as the visiting Vegas Golden Knights extended their winning streak to five games with a 4-2 victory over the Los Angeles Kings on Friday night.

It was Pacioretty’s fourth two-goal game of the season and the 52nd of his career. William Karlsson and William Carrier also scored goals for Vegas, which increased its West Division lead to five points over the idle Colorado Avalanche.

Alec Martinez added two assists for the Golden Knights, who improved to 11-2-0 over their past 13 games. Mark Stone also had an assist to extend his point streak to a team-record 10 games.

Lehner made his first start in goal since Feb. 7 after being sidelined with a concussion.

Alex Iafallo and Trevor Moore scored goals for Los Angeles, which fell to 0-3-0 against the Golden Knights this season. Jonathan Quick, making his first start after missing five games with a lower-body injury, had 29 saves.

Vegas jumped out to a 2-0 lead midway through the first period on goals 2:36 apart by Pacioretty. The first came when he crashed the net and drilled a wrist shot past Quick’s blocker side off a pass from Stone behind the goal line at 10:17.

Pacioretty’s second goal came on a backhand shot that Quick gloved by the left post and initially went undetected until the Situation Room in Toronto buzzed in. After about five minutes of reviewing various replay angles, it was determined that the puck in Quick’s glove had barely crossed the goal line.

Los Angeles cut the deficit to 2-1 with 18 seconds left in the first period when Iafallo knocked in a rebound of a Anze Kopitar shot for his seventh goal of the season.

The Kings tied it at 6:18 of the second period when Moore redirected Matt Roy’s shot from the right point over Lehner’s blocker for his fourth goal of the season.

Vegas regained the lead, 3-2, nine minutes later. Karlsson deflected Jonathan Marchessault’s shot from the left point that bounced past Quick’s blocker side, resulting in his seventh goal of the season and his 200th career point with Vegas.

Carrier extended the lead to lead to 4-2 midway through the third period with his first goal in 32 games, dating back to last season. He deflected Nicolas Hague’s blast from the left point just inside the left post.