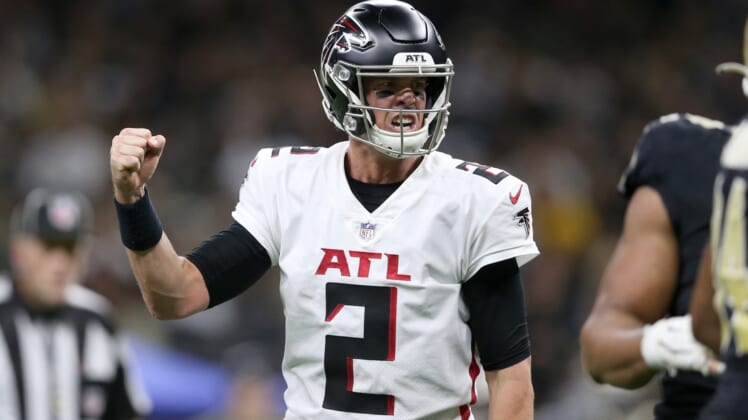 Matt Ryan threw two touchdown passes, ran for another score and drove visiting Atlanta to a game-winning field goal as time expired in a 27-25 victory over the New Orleans Saints on Sunday afternoon.

Ryan’s 64-yard completion to Cordarrelle Patterson set up Younghoe Koo’s winning 29-yard field goal. The Falcons escaped after Trevor Siemian had rallied the Saints (5-3) from an 18-point fourth-quarter deficit to a one-point lead on an 8-yard touchdown pass to Kenny Stills with 1:01 left.

Ryan completed 23 of 30 for 343 yards and connected with Olamide Zaccheaus on both scoring passes for the Falcons (4-4).

Siemian, making his first start since Jameis Winston suffered a season-ending knee injury in a win against Tampa Bay a week earlier, completed 25 of 41 for 249 yards with two touchdowns.

The Saints didn’t score in the first half, but on the first possession of the second half they drove to Brian Johnson’s 35-yard field goal, cutting the Falcons’ lead to 10-3.

Ryan answered on the ensuing possession with a drive that ended with his one-yard touchdown run for a 17-3 lead at the end of the third quarter.

On the second play of the fourth quarter, Johnson kicked a 52-yard field goal to trim the lead to 17-6.

New Orleans drove across midfield on its next possession, but Siemian fumbled when he was sacked by James Vaughters. Steven Means recovered and returned 32 yards to the Saints’ 6-yard line.

On the next play Ryan threw a touchdown to Zaccheaus for a 24-6 lead with 10:39 remaining.

Siemian’s 5-yard touchdown pass to Marquez Callaway and a 2-yard touchdown run by Alvin Kamara cut the lead to 24-19 after a two-point conversion failed with 4:35 left.

The Falcons went three and out and Siemian drove the Saints to his go-ahead touchdown pass to Stills.

Koo kicked a 32-yard field goal to give the Falcons a 3-0 lead at the end of the first quarter.

Atlanta drove 92 yards and Ryan threw a 3-yard touchdown pass to Zaccheaus with six seconds left to take a 10-0 lead at halftime.