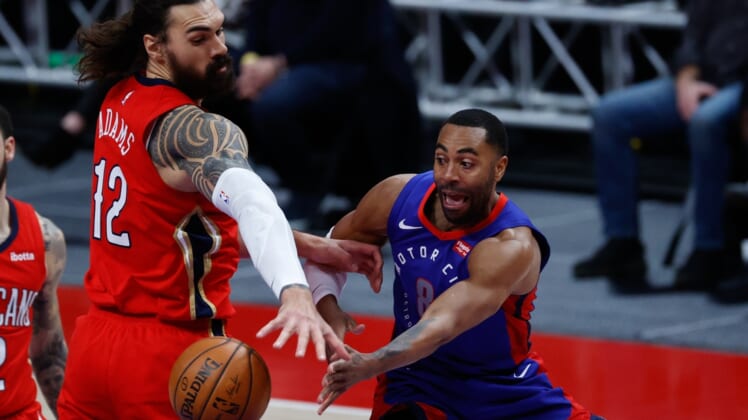 Mason Plumlee notched his first triple-double in the 557th game of his career, Josh Jackson scored a team-high 21 points and the host Detroit Pistons downed the New Orleans Pelicans 123-112 on Sunday.

New Orleans allowed 25 3-pointers in each of its previous two losses. Its defense didn’t improve much, as Detroit knocked down 17 of 35 attempts from beyond the arc.

The Pistons led 77-70 four minutes into the second half following a Plumlee layup. His bounce pass to Mykhailiuk for a layup with 3:44 left in the quarter made it 88-81.

Mykhailiuk hit a 3-pointer during a 9-0 run late in the quarter that pushed Detroit’s lead to 97-84. New Orleans scored the last five points of the quarter, including an Ingram long ball, to cut its deficit to eight.

Mykhailiuk’s 3-pointer from the top of the key gave Detroit a 108-97 advantage with under eight minutes left.

Jackson’s layup with just over four minutes left kept the spread at 11 points, 116-105. Jackson fired in a 3-pointer with 1:35 remaining for a 12-point lead. Detroit made free throws to close out the victory.

Detroit gave up 40 points in the first quarter and trailed by 12 early in the second quarter. Its defense tightened while Plumlee and Jackson carried their club to a 64-62 halftime lead.

Plumlee had 13 points, seven rebounds and five assists during the half, while Jackson scored 12 points in eight minutes off the bench. Williamson led the Pelicans with 18 points.