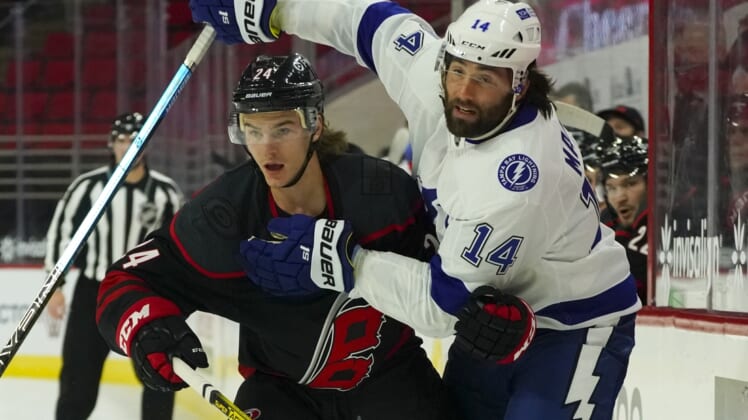 Martin Necas scored 1:12 into overtime and the Carolina Hurricanes came off a long layoff by defeating the visiting Tampa Bay Lightning 1-0 on Thursday night in Raleigh, N.C.

The Hurricanes had been out of action for more than a week, and they returned to the ice without several key players.

Jordan Staal fed Necas for the winning goal, which came on the team’s third shot in the extra session. It was Necas’ first goal of the season. Dougie Hamilton also was credited with an assist.

Goalie Petr Mrazek made 31 saves for the Hurricanes. He didn’t face a shot in overtime.

The Hurricanes were without five lineup regulars because of COVID-19 protocols. Staal, the captain, was on the ice even though he was the first member of the team to go out because of the virus — and the first of that group to return.

The game was Carolina’s home opener after two home games were among the three to be postponed.

Tampa Bay was dealing with time off as well. The Lightning hadn’t played since Saturday afternoon. The Lightning were coming off their first loss of the season.

Teuvo Teravainen, Warren Foegele, Jordan Martinook, Jaccob Slavin and Jesper Fast were out of Carolina’s lineup. As a result, Steven Lorentz made his NHL debut for the Hurricanes. He was a 2015 draftee of the organization. Also, Sheldon Rempal and Max McCormick appeared in their first games in Hurricanes uniforms.