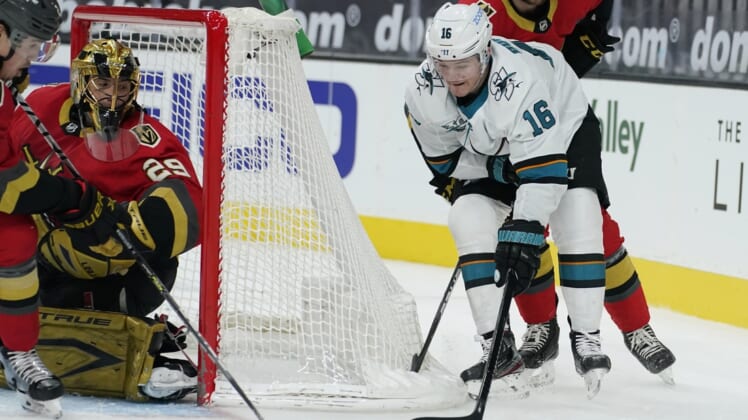 Marc-Andre Fleury made 23 saves and Mark Stone and Max Pacioretty each had a goal and an assist as the Vegas Golden Knights won their third straight game, beating the San Jose Sharks 2-1 on Monday night in Las Vegas.

Stone extended his point streak to eight games and registered his sixth game-winning goal of the season for Vegas, which increased its West Division lead to four points.

Fleury made his 16th start in the past 17 games as the Golden Knights improved to 12-1-3 all-time in regular-season games against San Jose, including 8-0-2 in the past 10 meetings.

Timo Meier scored a goal and Devan Dubnyk recorded 34 saves for the Sharks, who had a three-game winning streak snapped.

Vegas took a 1-0 lead midway through the first period on Pacioretty’s team-leading 14th goal of the season. The power-play score, which came a few minutes after Fleury turned aside Meier on a breakaway with a glove save, came on a wrist shot from the top of the right circle that sailed past a screen by Alex Tuch and into the top right corner.

The Golden Knights dominated action in the middle period, producing a 16-4 advantage in shots on goal, but Dubnyk was up to the challenge, making a handful of top-level saves. Still, the Sharks nearly tied it midway through the period but Logan Couture’s shot from the bottom of the left circle caromed off the crossbar.

Stone then made it 2-0 at the 1:02 mark of the third period with his 10th goal of the season. He ripped a backhanded Pacioretty drop pass from the edge of the right circle into the top right corner of the net.

Meier sliced the deficit to 2-1 with 5:31 to go in the game with his sixth goal of the season, patiently wrapping a wrist shot around Fleury and inside the right post. The Sharks nearly tied it about 90 seconds later, but Tomas Hertl’s shot from the slot bounced off the goalpost.

San Jose pulled Dubnyk for an extra attacker with 1:45 left, and thanks to an interference penalty on Pacioretty, had a six-on-four power play over the final 25.3 seconds. However, the Sharks managed just one shot, which Fleury easily gloved at the buzzer.