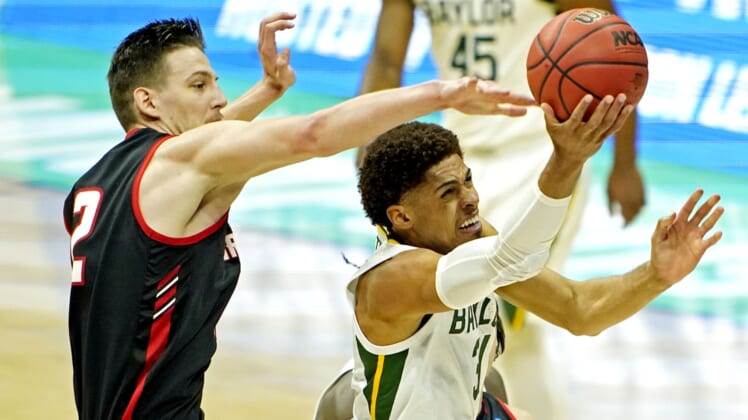 MaCio Teague pumped in 22 points as top-seeded Baylor began its quest for a national title with a 79-55 trouncing of 16th-seeded Hartford on Friday afternoon at Lucas Oil Stadium in Indianapolis.

Baylor (23-2) will meet Friday night’s Wisconsin-North Carolina winner in Sunday’s second round of the South Region.

Baylor received 27 points from its reserves, led by Adam Flagler’s 12 points. He made three of the team’s 11 3-pointers.

Austin Williams racked up 19 points and Traci Carter had 11 points for Hartford (15-9), which made its NCAA Tournament debut after winning the America East tournament. The Hawks had won five games in a row, but they were hindered by committing 24 turnovers against Baylor.

The Bears were credited with 15 steals.

Teague connected on four 3-point shots as part of the Bears’ 11-for-33 shooting from long range. Butler was just 1-for-8 on 3s, but he delivered nine assists and made five steals. Teague was good on nine of his 17 field-goal attempts overall.

The Bears, who hold a top regional seed for the first time in program history, used a 14-4 spurt in the first half to begin to take command. That was on the way to a 37-21 halftime edge.

Hartford didn’t reach the 30-point mark until less than 15 minutes remained in the game. The Hawks were within 43-30 before Baylor rattled off the next 10 points, beginning with a Teague 3-pointer and capped by Mitchell’s 3.

The Hawks shot 35.2 percent from the field for the game. The made only five of their 22 attempts from 3-point range, accounting for nearly half of their field-goal launches.

Hartford’s bench players contributed 12 points, but they combined to shoot 5-for-14 from the field, including misses on all five 3-point tries.