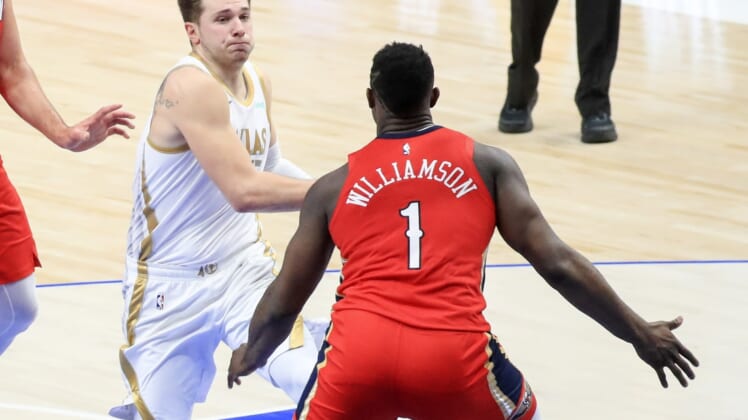 Doncic made 17 of 30 field-goal attempts, including 5 of 8 from 3-point range, and Porzingis was 13 of 21, including 8 of 13 from beyond the arc. Dorian Finney-Smith added 14, Jalen Brunson had 13 and Josh Richardson 11 as the Mavericks won a shootout with the Pelicans’ Zion Williamson and Brandon Ingram.

The Mavericks, who swept the four-game series last season, won this season’s first meeting, which was postponed from Jan. 11 because of COVID-19 issues with Dallas.

Doncic made three 3-pointers and Richardson and Porzingis made one each as Dallas took a 91-80 lead midway through the third quarter.

Porzingis made two 3-pointers and Tim Hardaway Jr. added one as the Mavericks extended the lead to 106-93.

Redick scored five points as New Orleans closed within 108-101 at the end of the third quarter.

He added a 3-pointer to start the fourth-quarter scoring, but Doncic made a 3-pointer and another basket to help Dallas take a 116-104 lead.

Porzingis made four 3-pointers as the Mavericks took an early 21-16, and he finished the first quarter with 15 points.

But Ingram scored 14 and Williamson had 10 as the Pelicans surged to a 34-27 lead at the end of the period.

Doncic started the second quarter with nine points and an assist as Dallas pulled within 39-38.

New Orleans rebuilt the lead to seven, but the Mavericks made six 3-pointers, the last two by Porzingis, to take a 69-65 halftime lead.