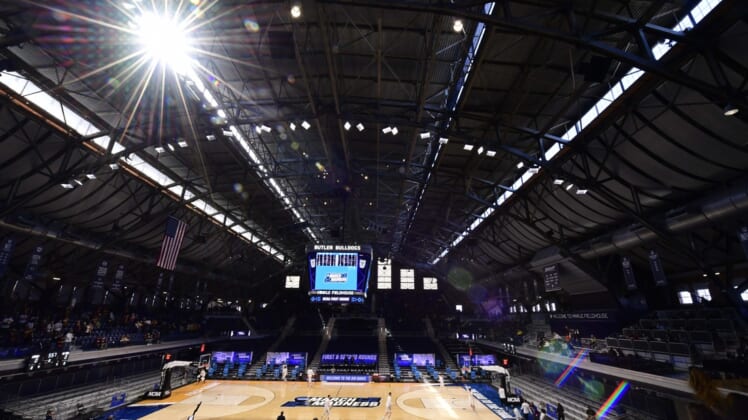 Mar 19, 2021; Indianapolis, Indiana, USA; A general view before the first round of the 2021 NCAA Tournament between Georgia Tech at Loyola at Hinkle Fieldhouse. Mandatory Credit: Marc Lebryk-USA TODAY Sports

Lucas Williamson scored a game-high 21 points Friday as eighth-seeded Loyola eliminated ninth-seeded Georgia Tech 71-60 in the first round of the NCAA Tournament’s Midwest Region in Indianapolis.

Braden Norris added 16 points and eight assists for the Ramblers (25-4), which advanced to a second round matchup Sunday with top-seeded Illinois. The Fighting Illini cruised past Drexel earlier Friday 78-49.

Keith Clemons tallied 12 points and Missouri Valley Conference Player of the Year Cameron Krutwig kicked in 10. Loyola sank 11 of 26 3-pointers and also dominated the glass to the tune of 29-16, scoring 15 second-chance points and allowing just one offensive rebound.

Jordan Usher scored 15 points to pace the Yellow Jackets (16-10), while Michael Devoe added 14 and Jose Alvarado hit for 13 points. Georgia Tech canned 57.4 percent of its field goal attempts, but couldn’t make up for the absence of Atlantic Coast Conference Player of the Year Moses Wright, who sat out due to COVID-19 protocol.

The Yellow Jackets wiped out a five-point halftime deficit. Georgia Tech owned a 43-40 lead with 11:57 left in the game after Khalid Moore’s dunk, but Williamson hit a 3-pointer and a layup during a 10-0 run that gave the Ramblers the lead for good.

Even without Wright, Georgia Tech came out of the gate smoking. When Devoe converted a layup at the 13:46 mark, the Yellow Jackets owned a 13-3 lead, forcing Loyola coach Porter Moser to burn a timeout. The Ramblers went nearly six minutes between baskets.

But as is characteristic of a squad with mostly juniors and seniors in the lineup, Loyola steadied and found a rhythm on both ends. When Krutwig hit a layup with 2:48 left in the half, the Ramblers took a 24-23 edge, their first since Williamson stroked a 3-pointer 59 seconds into the game.

That was part of a half-ending 13-2 run, capped by a mid-range jumper from Marquise Kennedy with 11 seconds remaining that sent Loyola to the locker room with a 30-25 advantage.