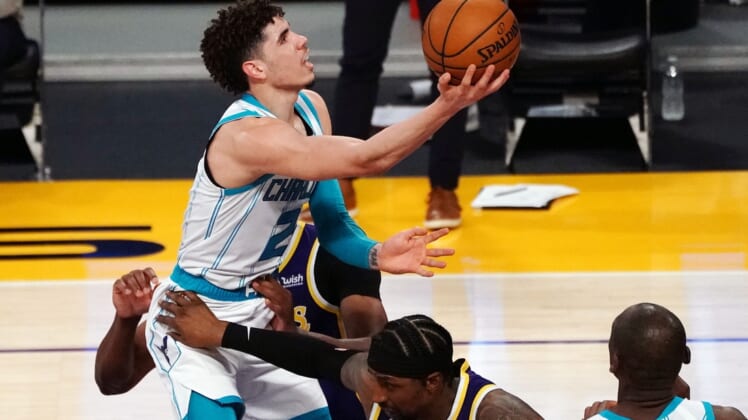 LeBron James welcomed LaMelo Ball back to Los Angeles with a 37-point performance Thursday night, lifting the Lakers to a 116-105 victory over the visiting Charlotte Hornets.

Ball, the former standout at Chino Hills High in the Los Angeles suburbs, put on a nice show in his Staples Center NBA debut. He led the Hornets with 26 points while also finding time for five rebounds and seven assists.

The Lakers were in command most of the way, but a third-quarter push allowed the Hornets to draw even at 64-all on a Ball layup.

Los Angeles was up just 83-78 entering the fourth period and then just 86-85 when Ball nailed a 3-pointer with 10:13 to play. However, the Lakers’ Markieff Morris connected on consecutive hoops, including a 3-pointer, James added a jumper and Dennis Schroder buried a 3-pointer in a 10-0 burst that broke the game open.

The 37-point performance was James’ ninth game with 30-plus points this season. His high was 46 at Cleveland on Jan. 25.

Schroder backed James with 22 points and a team-high seven assists for the Lakers, who were facing the Hornets for the first time this season.

Kyle Kuzma and Talen Horton-Tucker chipped in with 12 points apiece while Montrezl Harrell was the Lakers’ top rebounder with 11 to complement seven points.

Ball’s 26-point total was eight shy of his season-best, set against the Utah Jazz on Feb. 5. It was his 14th game with 20 or more points in his rookie season and his eighth game with at least 20 points and seven assists.

Terry Rozier added 20 points for the Hornets, who had had a four-game winning streak snapped at Denver on Wednesday.

P.J. Washington finished with 18 points, eight rebounds and four blocks for the Hornets. Devonte’ Graham had 12 points and Gordon Hayward filled out the box score with seven points, a team-high-tying nine rebounds and a game-high 10 assists.

The Hornets remain in Los Angeles to face Clippers on Saturday night.