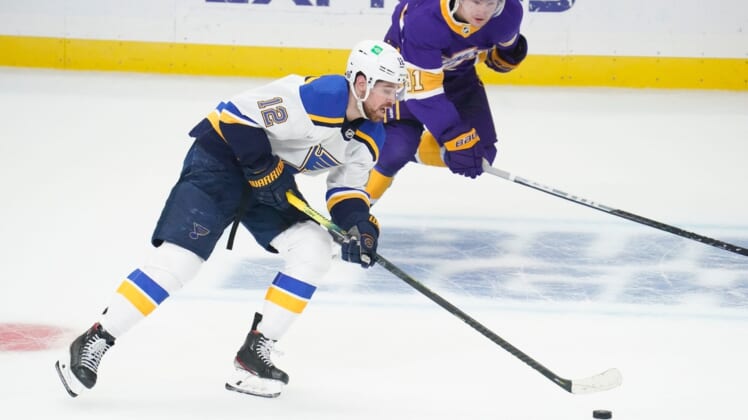 Trevor Moore, Anze Kopitar and Drew Doughty each had a goal and an assist for the Los Angeles Kings in a 4-1 win against the visiting St. Louis Blues on Wednesday night.

Carl Grundstrom also scored and Calvin Petersen made 19 saves for the Kings, who improved to 5-1-1 against the Blues this season.

Mike Hoffman scored and Jordan Binnington made 20 saves for the Blues, who have lost a season-high five consecutive games (0-2-3).

The Kings and Blues were scheduled to play Monday in the opener of a two-game set in Los Angeles, but the game was postponed because the Kings could not depart Denver following a 4-1 loss to the Colorado Avalanche on Sunday evening because of a snowstorm.

Los Angeles used the pent-up energy to surge to a 3-0 lead in the first period.

Doughty scored on the first power play of the game to give the Kings a 1-0 lead at 3:21.

It was the 64th power-play goal of Doughty’s NHL career, moving him past Wayne Gretzky for ninth in team history.

Kopitar assisted on Doughty’s goal to give him 20 power-play points on the season (three goals, 17 assists), which also ranks second in the league.

Grundstrom swept in a loose puck from in front of the crease before Binnington could get to it, expanding the lead to 2-0 at 4:19.

Sean Walker centered a pass from just below the goal line, and it went through the crease and off the skate of Moore, sending it across the goal line for a 3-0 lead at 14:11.

St. Louis cut it to 3-1 when Hoffman scored on a slap shot from just inside the blue line at the start of a delayed penalty at 16:29 of the second period.

Kopitar scored into an empty net with 1:40 left to make it 4-1. Petersen was credited with an assist on the play.