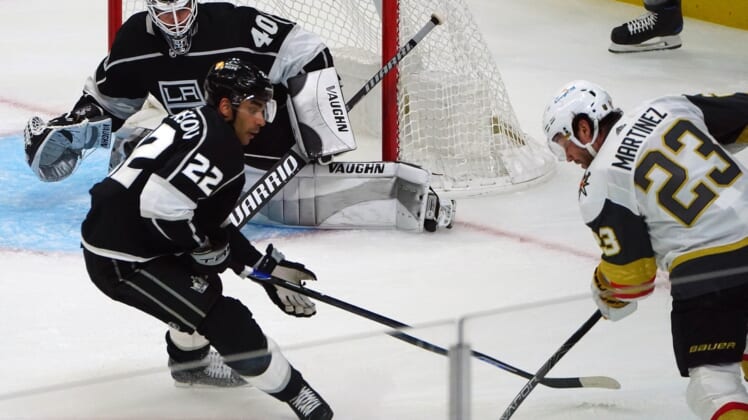 Cal Petersen made 41 saves and Anze Kopitar had two assists as the host Los Angeles Kings snapped the Vegas Golden Knights’ five-game winning streak with a 3-1 victory on Sunday afternoon.

Jeff Carter, Dustin Brown and Sean Walker scored goals for Los Angeles which won for the first time in four meetings with Vegas this season. The Kings also leapfrogged idle Arizona into fifth-place in the West Division.

Kopitar passed Bobby Orr (645) into 69th place on the NHL’s all-time list with his 646th career assist. It was also the 117th multi-assist game of his career.

Tomas Nosek scored a goal and Marc-Andre Fleury finished with 28 saves for Vegas. The West Division leading Golden Knights played without leading goal scorer Max Pacioretty who was a late scratch with a lower body injury after blocking a shot near his left ankle at the end of the team’s 4-2 win over the Kings on Friday.

Los Angeles scored twice 51 seconds apart early in the second period to take a 2-0 lead. The first came during a goalmouth scrum that saw Fleury turn away two shots before Walker, while falling on his stomach, backhanded in a rebound inside the left post for his first goal of the season.

Vegas challenged the score for goaltender interference but was denied and was assessed a minor delay of game penalty. Brown then scored his eighth power-play goal and 14th goal of the season with an easy tap-in by the right post off an Alex Iafallo pass across the crease.

The Kings nearly made it 3-0 later in the second period but Fleury kicked away Blake Lizotte’s point-blank short-handed try.

Chandler Stephenson was initially awarded a power-play goal for Vegas early in the third period, but it was overturned after video replay showed Drew Doughty had kicked the puck away by the left post before dislodging the net for a delay of game penalty. The Kings then killed off 91 seconds of a 5-on-3 power play.

Nosek cut it to 2-1 with 3:37 remaining with a rebound off his hip of his own shot from near the left post. But Carter made it 3-1 just 55 seconds later when he picked up a loose puck and then beat Fleury with a backhand shot five-hole on a breakaway for his sixth goal of the season.