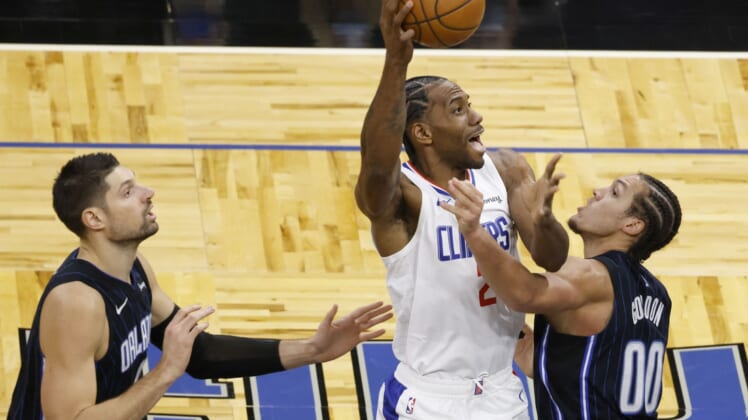 Kawhi Leonard and Paul George returned after missing the past two games and combined for 50 points to lead the visiting Los Angeles Clippers to a 116-90 win against the Orlando Magic on Friday night.

George had 26 points and nine rebounds and Leonard finished with 24 points after both missed the first two games of the six-game road trip because of the league’s COVID-19 health and safety protocols.

Serge Ibaka and Marcus Morris Sr. added 13 points each for the Clippers, who have won 14 straight against the Magic, the longest current winning streak by any NBA team against a particular opponent.

Terrence Ross made his first seven field-goal attempts and first six free throws before finishing with 24 points off the bench for Orlando. Nikola Vucevic was the only other player in double figures for the Magic, scoring 10 points.

Orlando scored the first 11 points of the second half to pull within three, but the Clippers responded with a 15-2 run to take a 77-61 lead.

Reggie Jackson, who was starting his third straight game in place of Patrick Beverley (sore right knee), sank a jumper at the buzzer to make it 90-71 heading into the fourth.

The Clippers managed to extend their lead with Leonard on the bench for the fourth quarter and win for the ninth time in the past 10 games.

The Clippers came out hot behind Leonard and George, surging to a 14-3 lead after 4:10 of the first quarter. They led by as many as 13 in the opening quarter before the Magic closed with an 11-2 run to tie the score 26-26 entering the second.

The Clippers extended their lead back to double figures on a 3-pointer by Jackson that made it 50-38 with 4:42 left in the first half.

Leonard sank another 3 at the halftime buzzer to give Los Angeles a 62-48 lead, their largest advantage in the first half.

Leonard scored 18 points in the first half and George had 17, each shooting 6-for-10 from the field.