Dustin Hopkins made a 29-yard field goal with two seconds remaining to give the visiting Los Angeles Chargers a 27-24 win over the Philadelphia Eagles on Sunday.

The Chargers drove 98 yards on their first possession but came up empty. Starting from their own 1-yard line, they ran off 15 plays but turned the ball over on downs at Philadelphia’s 1.

Philadelphia tied it with a 75-yard drive, which Howard finished off with a 4-yard run. Smith’s 27-yard reception was the longest play during that possession.

The Eagles had a 68-yard drive late in the half but settled for Jake Elliott’s 24-yard field goal. 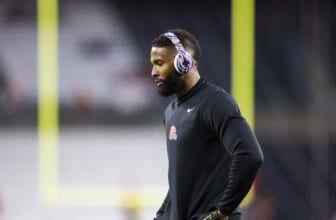 Also Read:
Odell Beckham Jr. wants to sign with contender, could cause ‘issues’ if claimed by wrong NFL team

Hopkins’ 30-yard field goal early in the third tied the game. Herbert’s 8-yard scoring pass to Donald Parham gave the Chargers a 16-10 lead but the extra point was missed.

Philadelphia regained the lead on an 85-yard drive that Kenneth Gainwell completed with a 1-yard run. Hurts completed three passes of 19 yards or more during that span.

Los Angeles regained the lead with 11:32 remaining on Herbert’s 8-yard run. He also tossed a two-point conversion to Cook for a 24-17 lead.

Hurts’ 28-yard pass to Smith with 6:07 remaining tied it up. Hurts picked up first downs with his legs twice during the drive.