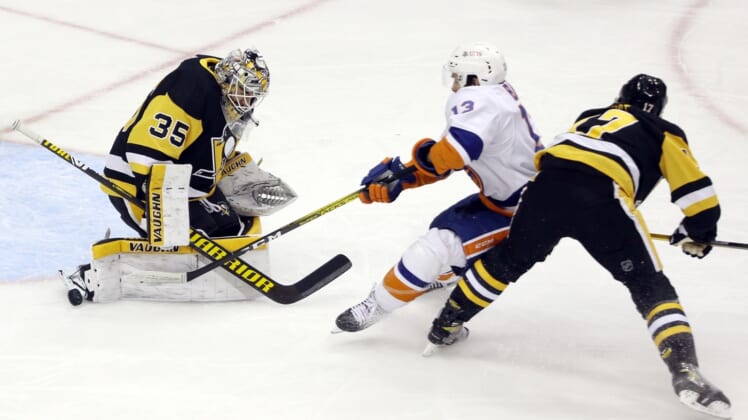 Jason Zucker had a goal and an assist Thursday as the Pittsburgh halted the visiting New York Islanders’ eight-game point streak with a 4-1 win.

Brock Nelson scored and Semyon Varlamov made 33 saves for New York, which was 5-0-3 in its previous eight games.

In an incident that is becoming a rarity in the NHL, Pittsburgh’s Brandon Tanev and New York’s Casey Cizikas fought at 2:18 of the first period.

For the first time this season, Pittsburgh right winger Kasperi Kapanen skated on the top line with Crosby and left winger Jake Guentzel, and it paid off with the opening goal.

Guentzel, from along the end board, had his pass intercepted by the Islanders in the left circle, but Kapanen immediately stole the puck back, turned and shot. Crosby deftly sent a backhanded tip past Varlamov at 4:15 of the first.

Kapanen, acquired in an offseason trade, was ticketed for Crosby’s wing but missed training camp and the start of the season after visa issues in his native Finland and a COVID-19 quarantine period. He spent his first 11 games skating mostly on the second line.

At 18:01 of the second, Mike Matheson drew Varlamov far to his right with a shot. Blueger got to the rebound on the far side of the crease and had an open net to make it 2-0.

Pittsburgh’s new second line, with Rust trading spots with Kapanen, produced a goal off an effective passing sequence at 9:11 for a 3-0 lead.

Matheson pilfered the puck along the left wing boards and got the puck to Malkin, who sent it to Rust behind the net. Rust’s centering pass found Zucker closing in on the crease for a one-timer.

On a power play, Nelson spoiled Jarry’s shutout bid off a feed from Josh Bailey with 4:21 left in regulation.