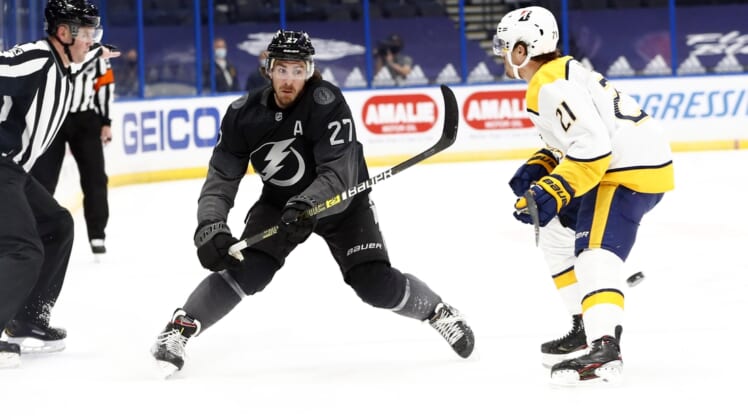 Callan Foote notched his first NHL tally in Tampa Bay’s four-goal second period Saturday night as the Lightning shook off their offensive rust in a 4-3 win over the visiting Nashville Predators.

The son of 19-year NHL defenseman Adam Foote, the younger Foote — also a blueliner — broke a 1-1 tie with a blast from the left circle at 6:41 of the second period as the Lightning gained control of the game.

Victor Hedman produced a goal and an assist, Tyler Johnson and Steven Stamkos scored and Brayden Point dished out two assists. Andrei Vasilevskiy turned away 23 of 26 shots in his 32nd consecutive start.

After losses against Columbus and Carolina in their last two contests, the Lightning were victorious for the first time in three games (1-1-1) and broke a four-game home losing skid against the Predators.

In the first meeting between the teams this season, the Lightning found themselves mired in a scoring drought after going 88 consecutive games without being held scoreless.

They had not found the net since Ondrej Palat’s marker in the final minute of the first period in Columbus two games ago and were then blanked 1-0 in overtime Thursday against the Carolina Hurricanes — a span of 101:26.

The Predators — who had scored just twice on 28 power plays through their first seven games — cashed in on one when Ellis flipped scored with 2:05 left in the first.

Johnson finally broke the goalless streak at 3:33 to break open the four-goal flurry, taking advantage of a Nashville penalty-kill that had allowed 10 goals in 26 situations — including eight against the Dallas Stars in two games.

On the Lightning’s fourth man advantage, Stamkos blistered his third from the left dot for the club’s fourth unanswered goal.

In the third, Olivier potted his first career goal on a rebound at 5:57, and Arvidsson scored at 18:26 with Rinne on the bench. But Nashville couldn’t score again with the net empty and ran out of time.