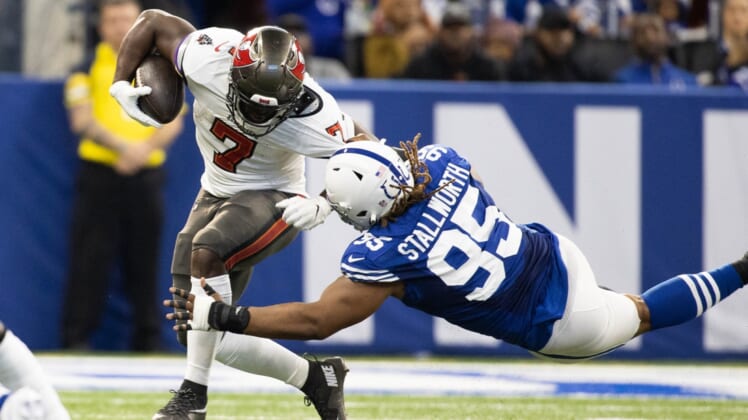 Leonard Fournette’s fourth touchdown of the game, a 28-yard run with 20 seconds left, lifted the Tampa Bay Buccaneers to a 38-31 win over the host Indianapolis Colts on Sunday.

Fournette, who rushed for 100 yards on 17 carries, plowed off the left tackle with Tampa Bay (8-3) trying to set up Ryan Succop for a potential game-winning field goal. He ran through a couple of arm tackles and tumbled into the end zone to complete his huge game.

The Colts (6-6) had a final chance after Isaiah Rodgers returned the kickoff 72 yards to the Buccaneers’ 32-yard line. But Carson Wentz‘s pass on the final play was intercepted by Pierre Desir at the 2 to end it.

Wentz completed 27 of 44 passes for 306 yards and three touchdowns, but also threw a pair of interceptions and lost a fumble early in the third quarter as Indianapolis was driving for a potential three-score lead.

Tom Brady hit on 25 of 34 passes for 226 yards with a touchdown and an interception for Tampa Bay. Rob Gronkowski caught seven passes for 123 yards.

NFL rushing leader Jonathan Taylor gained 83 yards on 16 carries, tying the game at 31 with a 4-yard run at the 3:29 mark. But the Colts stayed two games behind Tennessee in the AFC South.

The first half was controlled by Indianapolis, but not in the way it normally gets business done. Instead, the Colts went to the air in order to counter a Tampa Bay defense keying on Taylor.

After the Bucs took a 7-3 second-quarter lead when Fournette scored his first touchdown on a 1-yard run, Wentz answered with a 62-yard bomb to Ashton Dulin at the 11:44 mark. On Indianapolis’ next possession, Wentz finished a 90-yard drive with a 15-yard touchdown pass to Jack Doyle.

Fournette brought Tampa Bay within 17-14 on a 4-yard scoring reception from Brady, but Wentz led a 14-play drive in the final 1:56 that he concluded with a 4-yard touchdown pass to T.Y. Hilton. That gave the Colts a 24-14 halftime lead.

A 4-yard run by Fournette and 1-yarder by Ronald Jones in the third quarter put Tampa Bay ahead, 28-24.