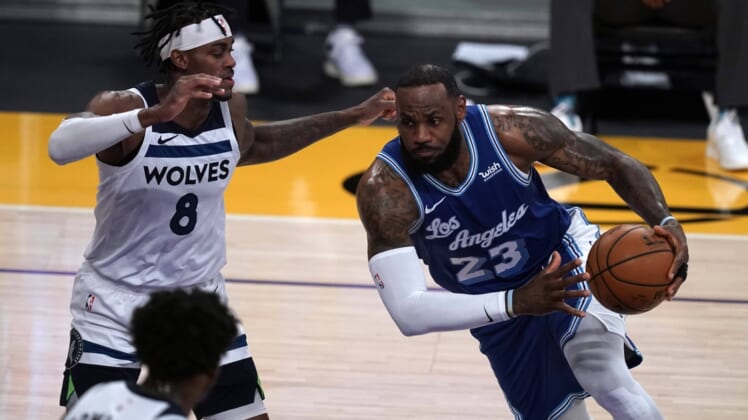 LeBron James recorded a second consecutive triple-double to reach 99 for his career Tuesday night, delivering the Los Angeles Lakers to a 137-121 victory over the visiting Minnesota Timberwolves.

James and Montrezl Harrell led six players in double figures with 25 points apiece as the Lakers completed a back-to-back sweep after having dispatched of the Golden State Warriors 128-97 in San Francisco on Monday.

James, who had only three triple-doubles in his first 37 games this season, followed up Monday’s 22-point, 10-rebound, 11-assist effort with 25 points, 12 rebounds and 12 assists. It’s the 11th streak of two or more consecutive triple-doubles for James.

His career-best run has been a three-gamer, compiled three times, most recently in November 2019.

With 99 career triple-doubles, James moved within one of becoming just the fifth in NBA history to reach 100. Those who have achieved the milestone ahead of him are Oscar Robertson (181), Russell Westbrook (157), Magic Johnson (138) and Jason Kidd (107).

After giving up 40 points in the second quarter, the Lakers trailed 85-84 midway through the third period before dominating the final 18 minutes.

Dennis Schroder, Kyle Kuzma and Talen Horton-Tucker added 16 points apiece and Markieff Morris chipped in with 12 for the Lakers, who won their third straight.

Led by Harrell’s 11-for-16 accuracy, Los Angeles shot 57.5 percent while completing a 3-0 season-series sweep of the Timberwolves.

Towns complemented his 29 points with a team-high six rebounds and seven assists for Minnesota, which hasn’t beaten the Lakers since January 2019, a stretch of four games.

Ricky Rubio tied James for game-high assist honors with 12 to go with 19 points for the Timberwolves, who have split their last four decisions. Jaylen Nowell finished with 13 points.

Minnesota lost despite shooting 52.2 percent from the field.