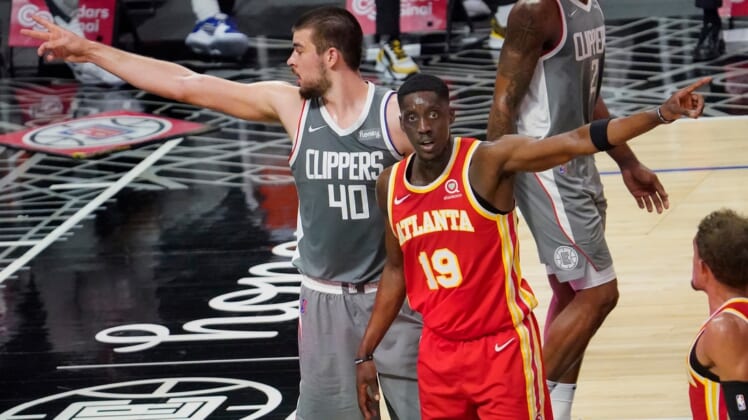 Led by their second unit, the Los Angeles Clippers battled back from a 22-point deficit in the second half to earn a 119-110 victory over the visiting Atlanta Hawks on Monday.

Clippers head coach Tyronn Lue pulled his starters midway through the third quarter, and the second unit cut the Hawks’ lead to eight points at the end of the third quarter with a half-court heave by Luke Kennard.

Kennard finished 8 for 8 for the field, totaling 20 points, seven rebounds and four assists in 18 minutes.

The second unit managed to cut Atlanta’s advantage to four points early in the fourth quarter and Lue put starters Kawhi Leonard and Paul George back in the game.

The Clippers then managed to tie the game at 105-all with just under four minutes left and took the lead for good at 110-108 with a Terance Mann 3-pointer from the corner with 2:42 left.

Mann finished with 21 points and 10 rebounds. Leonard led the Clippers with 25 points and Marcus Morris Sr. added 19 points on 5 for 8 shooting from beyond the arc.

“That was all heart and just guys staying ready,” Kennard said. “Guys have been staying ready this entire year. It’s been a difficult year with everything going on, no fans or anything. It’s tough, but I’m proud of those guys and the way they competed.”

L.A. has won four of its last six games. The Clippers play their next two games at San Antonio on Wednesday and Thursday, then return home for nine straight games.

The Clippers held a moment of silence before tip-off for Elgin Baylor, who died of natural causes at the age 86 on Monday. Baylor served as general manager of the Clippers for 22 seasons and was named NBA Executive of the Year for the 2015-16 season.

The loss snapped Atlanta’s eight-game winning streak, a run that coincided with Nate McMillan taking over as coach.

The Clippers led by as many as 10 points early in the first half, but the Hawks turned up their defense. Led by point guard Trae Young, Atlanta grabbed a 63-48 lead at halftime.

Young paced the Hawks with 28 points, including 20 in the first. Young also contributed eight assists and five rebounds, but finished with four turnovers.

The Hawks are 1-1 on their eight-game road trip out West and next travel to Sacramento on Wednesday.