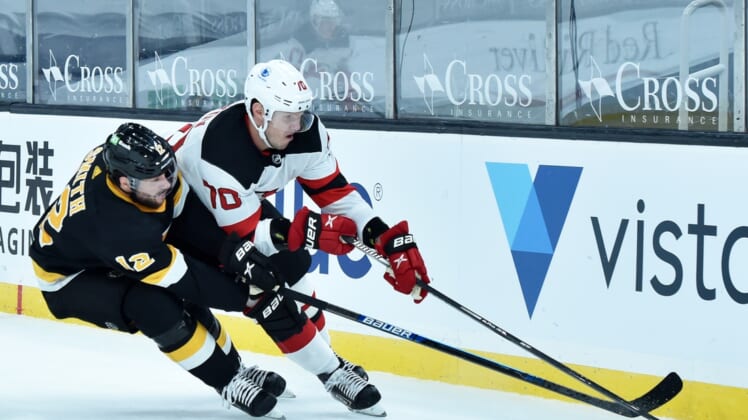 Kyle Palmieri scored his first two goals of the season in the second period Thursday night for the visiting New Jersey Devils, who never trailed in beating the Boston Bruins, 3-2.

Palmieri hadn’t scored since a two-goal game against the New York Rangers on March 7, 2020. The multi-goal game Thursday was the 24th of his career.

Pavel Zacha also scored in the second for the Devils, who have won both games they’ve played since returning Tuesday from a 16-day coronavirus pause. Goalie Mackenzie Blackwood made 25 saves.

Jake DeBrusk scored in the second for the Bruins, who have lost back-to-back games in regulation for the first time in the regular season since Feb. 22-25, 2020. Charlie McAvoy scored with 1:06 left in the third while goalie Jaroslav Halak recorded 23 saves.

Palmieri and Jack Hughes teamed up to snap a scoreless tie 1:34 into the second. Palmieri picked up a loose puck at the edge of the Devils’ zone and dished to Hughes, who weaved through the neutral zone before dishing a no-look pass to Palmieri, who bore in on Halak for the goal.

A high-sticking call on P.K. Subban at 9:05 gave the Bruins a four-minute power play, but Palmieri scored the Devils’ first short-handed goal of the season just 64 seconds later when he took a clearing pass from Damon Severson and beat Halak between the legs on a breakaway.

The Bruins scored on the power play thanks to a mistake by Palmieri just under two minutes later. Palmieri tried backhanding the puck out of the Devils’ crease, but DeBrusk swooped in and fired a shot beyond Blackwood’s stick with 7:24 left for his first regular season goal since Mar. 3, 2020.

The Devils extended the lead 3:01 later following a nifty exchange between Zacha and Andreas Johnsson. Zacha controlled the puck while spinning around DeBrusk in the slot before dishing to Johnsson, who was in the faceoff circle. Johnsson came to a halt, which deked out John Moore, and passed back to Zacha, whose shot sailed over Halak’s shoulder.

The Bruins didn’t threaten in the third until pulling Halak prior to a power play with 2:11 left. McAvoy scored when he redirected a shot by David Pastrnak and Boston nearly tied it twice in the final seconds, when Blackwood turned back shots by McAvoy and Pastrnak.