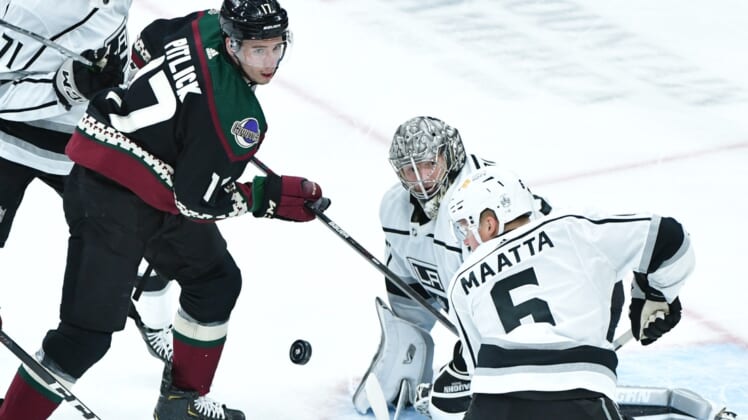 Gabriel Vilardi scored the decisive goal in the fourth round of a shootout and the Los Angeles Kings extended their winning streak to three games with a 3-2 victory over the Arizona Coyotes on Thursday night in Glendale, Ariz.

Nick Schmaltz and Christian Dvorak scored in the first three rounds of the shootout for Arizona while Anze Kopitar and Adrian Kempe tallied for Los Angeles. Clayton Keller then fired a shot over the goal to start the fourth round, and Vilardi followed with a wrist shot past goaltender Darcy Kuemper’s glove side to win it.

Dustin Brown and Jeff Carter scored goals and Jonathan Quick made 20 saves for Los Angeles. Conor Garland and Phil Kessel tallied for Arizona, which fell to 1-2-1 in its past four games. Kuemper finished with 27 saves.

Los Angeles, playing the first game of a season-high, six-game road trip, outshot the Coyotes 14-6 while taking a 2-0 lead after one period.

Brown started the scoring at 4:21 with his eighth goal of the season. He sneaked behind the defense and took a Kopitar pass from the left boards all alone near the slot, then beat Kuemper top shelf on his glove side.

Carter made it 2-0 midway through the period when he tapped in a rebound under a spread-eagled Kuemper for his third goal of the season. The score was initially waved off for goaltender interference but was awarded following a video review.

Arizona bounced back to tie it with two goals in the first 5:51 of the second period.

Garland cut it to 2-1 one minute in with his seventh goal of the season. He fired a wrist shot from the high slot that deflected in off the stick of Los Angeles’ Alex Iafallo, who was battling Nick Schmaltz in front of the net.

Kessel then tied it with his first goal since Jan. 20 and fifth of the season, poking the rebound of a Tyler Pitlick shot through Quick’s pads.

Both teams failed to convert on power plays in the third period. Arizona had the best chance to win it in overtime when Kessel broke in free, but Quick stopped his point-blank shot with his mask.