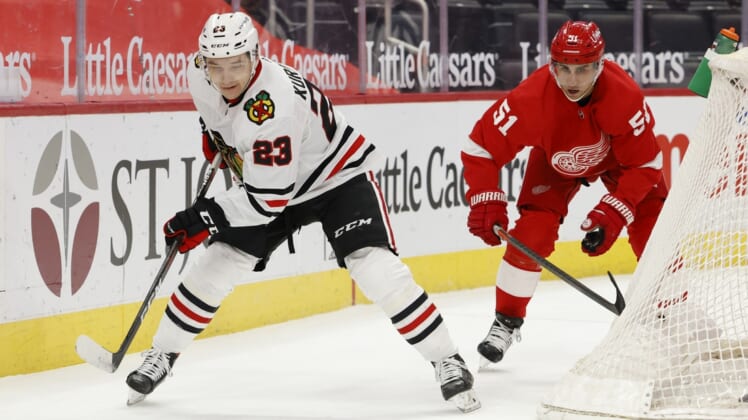 Alex DeBrincat, a native of the Detroit suburb of Farmington Hills, added an empty-net goal with 57.5 seconds remaining as the Blackhawks swept the two-game series and improved to 7-1-1 in their past nine games. Chicago won the series opener 3-2 Monday night in overtime.

Kurashev scored on the power play at 12:03 of the second period.

After Lankiken settled the puck, Duncan Keith skated it out of the Blackhawks’ end and passed to Kurashev at center ice. Kurashev, a 21-year-old rookie who was a fourth-round pick in 2018, drove past teammate Dominik Kubalik at the Detroit blue and then faced three defenders in his path.

Kurashev veered slightly to his right and split Detroit’s Jon Merrill and Troy Stecher on his way to the net. Kurashev faked going to his backhand before he drew the puck back to his forehand and slipped it between the pads of Red Wings goalie Jonathan Bernier.

Bernier stopped 24 of 25 shots to keep Detroit in the game.

The Red Wings, who had their first two-game point streak of the season snapped, had their best opportunity to score with about five minutes left. Christian Djoos skated in from the left wing and deked Lankinen, with the goalie falling to the ice well out of the net, but the puck rolled past the goal line, leaving Djoos no option but to pass it in front of the net. Detroit’s Bobby Ryan found the puck among a maze of legs but slid a backhander off the right post.

The Blackhawks improved to 4-0 against Detroit this season, with four more games remaining against their Central Division rivals.