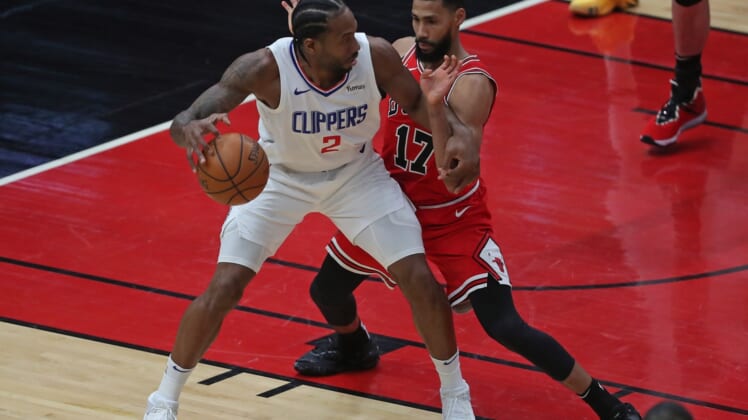 Kawhi Leonard scored 33 points on 14-for-21 shooting, Marcus Morris Sr. added 20 points off the bench, and the Los Angeles Clippers cruised to a 125-106 win over the host Chicago Bulls on Friday night.

Lou Williams (17 points), Ivica Zubac (12 points) and Reggie Jackson (11) also scored in double digits for Los Angeles, which won its second game in a row after losing three of the previous four.

Zach LaVine led the Bulls with 26 points on 11-for-21 shooting. Coby White and Tomas Satoransky each contributed 17 points for Chicago, which has lost four of its past six games and seven of its past 10. Denzel Valentine and Garrett Temple each scored 10 points for the Bulls.

Chicago trailed by at least 10 points for the entire fourth quarter. The Clippers increased their lead to 19 after Morris Sr. knocked down a 3-pointer with 7:01 to go.

Less than three minutes later, Morris Sr. drained another shot from beyond the arc to push the lead to 20.

Los Angeles entered the fourth quarter with a 90-78 advantage.

Zubac provided a highlight-reel pass when he saw Leonard cut toward the paint and fed him perfectly for a thunderous dunk to make it 80-74 with 4:14 remaining in the third quarter. The play seemed to spark the Clippers, starting a 12-4 run and extending the team’s lead to double digits.

The Clippers led 58-54 at the half. LaVine had 13 points to lead all scorers while Leonard paced Los Angeles with 12 points at the break.

The Bulls opened the game on a 6-0 run thanks to back-to-back 3-pointers by White. The hot start followed a historic performance by Chicago, which made a franchise-record 25 3-pointers two days earlier against the New Orleans Pelicans.

However, the Clippers quickly quieted the Bulls with a 14-0 run to go ahead by eight points. Leonard made a driving layup to start the outburst, which included a 3-pointer from Serge Ibaka and a three-point play from Terance Mann.

Los Angeles extended its lead to 24-12 on a jump shot by Leonard. Chicago closed the quarter on a 13-6 run to cut the deficit to five.

Clippers star Paul George missed his fourth straight game because of swelling in his right foot.